EDMUNDSON, Mo. – The Edmundson Police Department is asking for the public’s help in locating a missing teenage girl who is believed to be with a violent 26-year-old man.

Gabrielle S. Yonko, 16, and Christopher Johnson were last seen on Monday, September 23 at the home of Gabrielle uncle in the 9800 block Treadway Lane near St. Louis Lambert International Airport, according to the police department.

Authorities say Johnson took the teen in his vehicle and left the residence just before 10:45 p.m. without permission. Gabrielle and Johnson are believed to be traveling in a Black 2008 Lexus LS  with Washington state license plates BEC5322, with dark window tint and front plate. 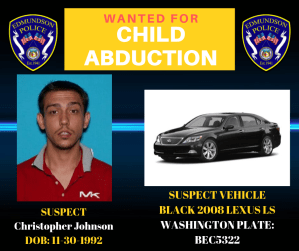 Johnson has a long criminal history including escaping from custody and is known to be physically violent, authorities say.

Yonko, is a white female, 4 feet 11 inches, 140 pounds. She has blonde hair and brown eyes. She was last seen wearing a St. Louis Blues t-shirt and black leggings. Johnson is described as a white male, 5 feet 4 inches, weighing 115 pounds with black hair and brown eyes.

If you have any information regarding the whereabouts of Gabrielle or Johnson, you are asked to contact the Edmundson Police Department at 314-427-8000 or 911.