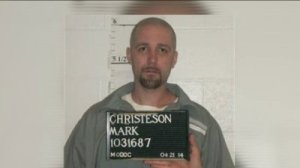 BONNE TERRE, MO (KTVI) – A convicted rapist and murder was executed by the state of Missouri Tuesday night.  Mark Christeson was convicted of the 1998 murders of Susan Brouk and her two children, Adria, 12, and Kyle, 9.  The execution came one day shy of the 19-year anniversary of the killings.

Court documents show Christeson was 18-years-old at the time decided to run away with his 17-year-old cousin Jessie Carter.  The police account contended the duo entered Brouk’s home and started to tie up the children.  Christeson then forced Susan Brouk into her daughter’s bedroom at gunpoint and raped her.

Investigators said the duo then forced Brouk and her children to a pond near Vichy, Mo. where Brouk and her son’s throats were cut.  Christeson choked Adrian before all three were thrown into the pond.

The duo was caught in California.  Carter eventually testified against his cousin and is serving a life sentence.  Christeson was scheduled to be executed in 2014 but won an appeal.  His attorney argued Christeson did not have adequate legal representation because his lawyer missed a simple deadline to file a federal appeal.

“Tonight, as we remember Susan, Adrian, and Kyle Brouk, our thoughts and prayers are again with their family members and loved ones. The acts of violence that took this 36-year-old mother, her 12-year-old daughter, and her nine-year-old boy were unspeakably cruel.

Susan was a single mother whose life revolved around her children. Adrian was a seventh grader who did well in school and played volleyball. She hoped to one day be a veterinarian or a teacher. Kyle was only nine. He played soccer and dreamed of being an Army officer. They were a loving family, living a quiet life in a rural community. Their hopes and dreams were taken away by these evil crimes.

The man who was found guilty by a jury of raping and murdering Susan and murdering her two beloved children, Kyle and Adrian, has now had his sentence carried out. We know that a Missouri family will always miss and grieve the young mother and her two children who have been gone for nearly 20 years. Tonight, we grieve with them.

The process of justice on this matter has now reached its conclusion. We pray for comfort and healing for the families and friends whose lives have been deeply affected by these unspeakable crimes, so that they may find closure and peace. I ask that Missourians join me in keeping the family of Susan, Adrian, and Kyle Brouk in their thoughts and prayers tonight.”

“Almost 19 years ago to the day my brother and sister were taken from us, this is the day that we finally get justice for them. I know that they are watching over us and they’re happy for all of us. There’s not a day that goes by that I do not miss them and I wish that they were here.

Now we have justice and we can all move forward through this tragedy the rest of the way. I was only five when they were taken from me but it has impacted my life entirely. I never got to have that special bond with my brother or sister that every kid wishes for.

Kyle was nine and Adrian was 12. They never got to fully live out their lives and go through college and high school and figure out what it is they wanted to do in this world.

But now that they are above us, watching over us, I know I have the world’s greatest guardian angels anybody could ask for.

This is a sad day, a happy day and a day that I will never forget. This poem that I am about to read was written by Adrian when she was in the sixth grade. I received it when I needed it the most. It’s like she was talking to me from above. It’s perfect.

Our love will always be there

Even when fate is not fair

Sometimes our love may be lost

But that’s not always the ultimate cost

Love is when you meet the unique

The one your heart is out to seek

Love is soaring to the sky

But not everyone can tell you why

Love is when your heart has a voice

What will happen is not your choice

(Continuation of statement from Harley Brouk)

I hope that this touched you guys as much as it touched me. I will never forget my brother or my sister. Rest in peace my sweet angels.”

“To let my family know I love them with all my heart and I’m more than blessed to have them in my life. And thank God for such an amazing family.”

JOPLIN, Mo. -- With unemployment, evictions, and foreclosures taking place across the country, many families may need to place all or some of their belongings in storage for a while.

And there have never been more options for that than there is today across the four state area.

The latest victim was the owner of a Volkswagen Jetta. They left their car along the side of a highway because of a flat tire Tuesday night. They returned in the morning and discovered the bad news.

ST. LOUIS - There are growing concerns for schools in Illinois with the governor's new vaccine mandate now taking effect.

Come Monday, schools may be forced to turn away unvaccinated employees, from teachers to bus drivers.

When to enjoy the fall colors along the Great River Road

Missouri school bus overturns in crash, 20 students on board