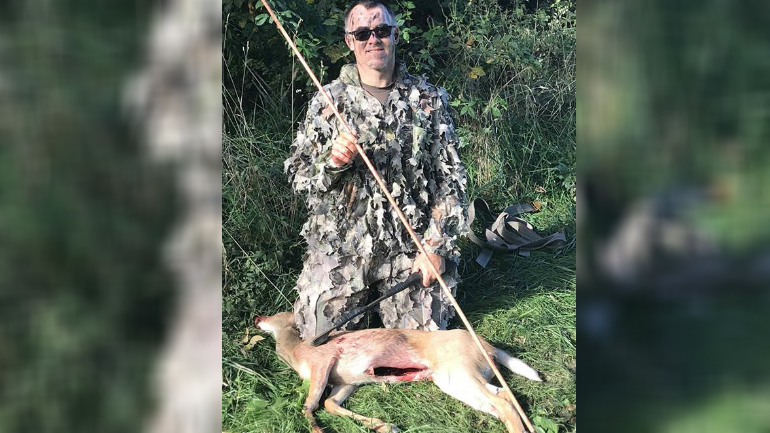 DeSOTO, MO — The Missouri Department of Conservation is showing their respect to a man who harvested a legal deer using a unique and difficult method. Johnny Williams of DeSoto used a 7-foot long atlatl spear to harvest a deer Saturday morning at Reform Conservation Area in southeastern Calloway County.  He made the spearhead himself.

“Congratulations to Johnny Williams of DeSoto for successfully harvesting a deer with an atlatl! Johnny said he’s been practicing two times a day for the last couple months to prepare for the archery season,” the Missouri Department of Conservation writes on Facebook.

“I have harvested several deer with a bow and three with a recurve, but this was beyond the coolest thing I’ve ever done,” Williams tells the Missouri Department of Conservation.

Part of the atlatl’s attractiveness is its accessibility for many who have difficulty with traditional archery. They are one of the allowed methods hunters can use during archery deer and turkey season.

The Missouri Department of Conservation describes the atlatl like this: “The atlatl is an 18–24-inch, handheld spear launcher. It has a handle on one end and a socket on the opposite end that holds the end of the spear or “dart,” much like the nock of an arrow fits onto a bowstring. The additional leverage provided by the atlatl allows the user to throw the dart much quicker — up to 100 miles per hour — than he or she could with arm-power alone.”

The June issue of Missouri Conservationist features an article about a couple who regularly use the atlatl to hunt deer.  You can learn about Dawn and Brian Wagner’s efforts with alternate hunting methods here.

MOOSIC, LACKAWANNA COUNTY (WBRE/WYOU) — Two people are being treated for non life-threatening injuries after a single-engine plane went down while trying to land at the Wilkes-Barre/Scranton International Airport Sunday night.

The call came in at 8:45 p.m. Sunday. The plane took down power wires as it landed, knocking out power to customers in the area.

SPRINGFIELD, Ill. (AP) — With the nation racing to come to grips with centuries of racial sins, officials plan to remove the Capitol lawn statue of Stephen A. Douglas, whose forceful 19th century politics helped forge modern-day Illinois but who also profited from slavery.

Just inside the Statehouse hangs another revered depiction of an Illinois legend — and longtime Douglas rival — who expressed white supremacist views: Abraham Lincoln. The immense painting in the governor's second-floor office depicts a Sept. 18, 1858, debate between the two men that opened with these words from Lincoln, who was vying for Douglas' Senate seat and was still two years away from running for president:

ST. LOUIS - St. Louis homicide detectives have been called to the Wells-Goodfellow neighborhood in north St. Louis for a homicide.  The shooting happened just before 6:30 p.m. Sunday evening in the 3400 block of Goodfellow.

Police say the victim, a 47-year-old male was shot in the head.  He was transported to the hospital unconscious and was not breathing.

Our Lady of Sorrows held a welcome mass for Archbishop Rozanski