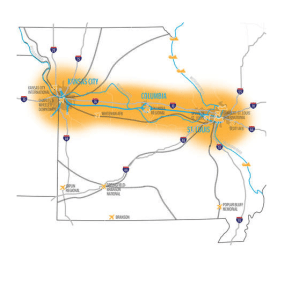 ST. LOUIS, MO – Economic development officials in both the St. Louis and Kansas City regions are expected to submit competing bids in hopes of luring Amazon’s second headquarters, ahead of the online giant’s Thursday deadline for proposals.

But officials with the state of Missouri are doing something they think is unique among the scores of proposals being pitched around the country: They’re entering a statewide proposal that would include an “Innovation Corridor” that spans locations  from Kansas City to St. Louis, and would include a site in Columbia.

The statewide plan would be in addition to identical state backing for individual bids being made by St. Louis and Kansas City metro leaders.

“It is not pie in the sky,” Drew Erdmann, Missouri’s Chief Operating Officer said of the statewide proposal, in a phone interview Wednesday night ahead of Thursday’s announcement. Citing a population base of three million people, higher education resources and air, land and other logistics, “this is a great area for Amazon to be competitive as they try and grow their business.”

A release from the state of Missouri says, “Missouri’s proposal encourages Amazon to consider beginning HQ2 in either St. Louis or Kansas City, and then in the years ahead, expand along an innovation corridor to the second city.”

Key in the overall Missouri plan is the evolution and innovation of communications technology and ground transportation, relying on ideas like Hyperloop, which could one day make it easy for someone to commute from St. Louis to Kansas City in 24 minutes instead of four hours. The state of Missouri is already a finalist for a Hyperloop feasibility study.

“Amazon explicitly says in the RFP that they are taking a 10-15-20 year perspective. This is not something that is what is the world of the next 18 months, this is the world of next 18 years, ” Erdmann said. “We, the state of Missouri, are challenging Amazon to think more boldly than their original proposal. If they expand their view, they’ll see the potential and the logic of what we’re talking about.”

Officials stressed that the St. Louis and Kansas City bids were being treated as equals and that no favoritism was shown for either proposal, which will have what they described as identical and creative incentive packages. While other states, like New Jersey have come out and said how much incentive money would be spent in hopes of luring Amazon, Missouri officials said state law requires that they not disclose those figures.  Erdmann and Missouri Economic Development Director Rob Dixon said they had been in touch with counterparts in neighboring Kansas and Illinois, but not with much specificity.  St. Louis’ proposal hypes the potential for a bi-state headquarters for Amazon on both sides of the Mississippi River. Illinois’ detailed role in backing the St. Louis project is still uncertain, but the state has already announced Chicago is bidding for the project as well.

As for the St. Louis and Kansas City bids, Erdmann said “the state government has two awesome cities that are competitive and we’ve treated them both equally and impartially and we hope that can be successful as possible.”

Missouri’s proposal, along with videos of Governor Eric Greitens and Hyperloop One CEO Rob Lloyd are available on the initiative’s website: http://www.makemohq2home.com/

JEFFERSON COUNTY, Mo. - The Jefferson County Health Department reports West Nile has been detected in a mosquito sample collected from Imperial.  A mosquito sample from Festus showed the virus present in August.  Health officials say the results are not cause for alarm but encourage residents to take precautions, including eliminating standing water.

“Standing water is definitely a spot where mosquitos tend to hang out and breed, so we want to eliminate that as much as possible,” said Brianne Zwiener, Jefferson County Health Department public information officer.

ST. LOUIS – A 20-year-old shooting victim says police have only recently begun investigating, more than a month after the frightening ordeal.

Kemeric Winston says he was shot in the head on July 29 while driving on Interstate 70.

NORMAL, Ill. - Twenty-five-year-old Jelani Day is a graduate student studying to get his master's in speech pathology at Illinois State University. He was last seen Aug. 24 and hasn't been heard from since.

Police found his car, a 2010 White Crysler 300 with a blacktop, in a wooded area in Peru, Illinois, a few days later.

"Nothing is more important to me than getting Jelani back," Carmen Bolden Day, Jelani's mother said. "I need help to find my son, it’s been 28 days.”

Jelani's family from Danville and a faculty member reported Jelani missing after he did not show up for class for several days. Bloomington police said they need tips from the public in their ongoing search.

You Paid For It: Here’s a look at crime in St. Charles

Caretaker’s sister, mother die after he chokes to death

Caretaker’s sister, mother die after he chokes to death

You Paid For It: Here’s a look at crime in St. Charles