GASCONADE, MO (KTVI) – A railroad bridge collapsed beneath a train in Gasconade County 160 years ago. The wreck on November 1, 1855, was the worst in Missouri history. When the Gasconade River is low, something is unveiled on the river bank. In fact, you can walk right up to it. One local outdoorsman believes it`s part of that train.

The town of Gasconade, Missouri, is marked by the river and the railroad. For decades trains have been passing through, crossing the railroad bridge.

“If you look behind me right over here you can see the boiler sticking on the bank. And if that’s the boiler for the train that wrecked, then that boiler has been there since 1855,” said Kevin Kennedy. “Well, what we’re looking at is the boiler; the rest of the train is gone.”

Kennedy believes the boiler is from a train engine that crashed into the river, along with several passenger cars. The railroad bridge collapsed 160 years ago; 20 people died and dozens were injured. 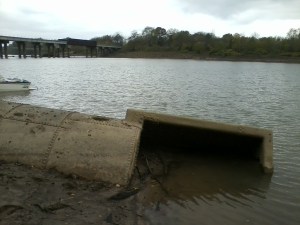 The Museum of Transportation in St. Louis County has trains from this era. For the record — the round, cylindrical thing on top of the engine is what is known as a boiler. That is what’s stuck in the mud at the bottom of that river.

But one FOX 2 viewer says this boiler is too small to be from the train engine that crashed into the Gasconade. That person believes while it’s a boiler, it’s from a boat. Kennedy says he’s heard other possibilities.

“There’s a theory that it was on a tug, but I’ve only heard that from three people compared to I don’t know how many,” said Kevin Kennedy.

JEFFERSON COUNTY, Mo. - A Jefferson County woman facing her own battle with cancer is lending a helping hand online to those dealing with the physical and mental anguish that comes with cancer.

In Oct. 2019 Tia Gundloch of Desoto was diagnosed with cancer causing her to enter a deep depression.

The department said they are aware of this black bear's whereabouts along with the Missouri Department of Conservation. They say as long as you don't bother the bear, it won't bother you. Keep an eye on all pets.

What COVID-era travel changes are likely here to stay?

(NerdWallet) - The COVID-19 pandemic changed the way the world works, eats, communicates and, yes, how it travels. Over the course of the last year, we’ve seen a myriad of changes in the travel industry, from in-flight meal service adjustments to the outright banning of travel to certain regions, and everything in between.

Mayors for Meals program is accepting donations on Saturday, May 8, to distribute to families in need

Dozens of parents, students rally to save Dunbar Elementary School

Waffle the rescue horse is expecting! Humane Society of Missouri launches live stream ahead of birth

Most expensive homes for sale in City of St. Louis

Florida principal under investigation for paddling child; Missouri one of 19 states with corporal punishment

What COVID-era travel changes are likely here to stay?

Mayors for Meals program is accepting donations on Saturday, May 8, to distribute to families in need