ST. LOUIS, MO — Hundreds of motorcycles flooded the streets of St. Louis over the weekend for the annual Ride of the Century.

The groups’ antics, particularly beneath one of the city’s most prized attractions, have many residents and visitors frustrated over what they are calling blatant disrespect.

Riders from all over the country showed up for the event. Fox 2/KPLR 11 received numerous complaints and there are countless posts on social media claiming riders harassed people near Busch Stadium and Ballpark Village, popped wheelies on the highway, and performed other dangerous maneuvers in traffic.

A video of motorcycles doing doughnuts and other stunts on the grounds beneath the Gateway Arch has gotten a lot of negative attention.

Bret Rich, who posted the video, said he was enjoying the evening at the Gateway Arch National park with his family when he heard the hum of motorcycles approaching. Rich said before he knew it, nearly a dozen motorcycles swarmed the park.

Video of the Bikers at the Arch from StLouis

Rich estimates there were about one hundred people spread across the grounds of the park which re-opened in July after a $380 million renovation project.

“How incredibly disrespectful that was,” said Rich. “This city’s gone through a lot to have the Arch renovated and to cover Highway 70 to make the Arch more accessible to the city, and a lot of people are very happy about that.”

According to park rangers, three men were detained and cited in this incident. The U.S. Attorney issued federal citations for Felix Torres, 23, of Texas, Dale Kiesgen, 32, of Illinois and Matthew Parisi, 20, of Ohio. The citations are for “operating a vehicle off a roadway.” Their motorcycles were also impounded.

Deputy Superintendent of the Gateway Arch National Park Frank Mares said, fortunately, the damage to the grass around the Arch was minimal.

You can see even more of the places they were riding in St. Louis in this video:

Remember those people riding their motorcycles on the new Archgrounds? One Reddit viewer snapped this pic of rangers having what appears to be a frank discussion with one of them: 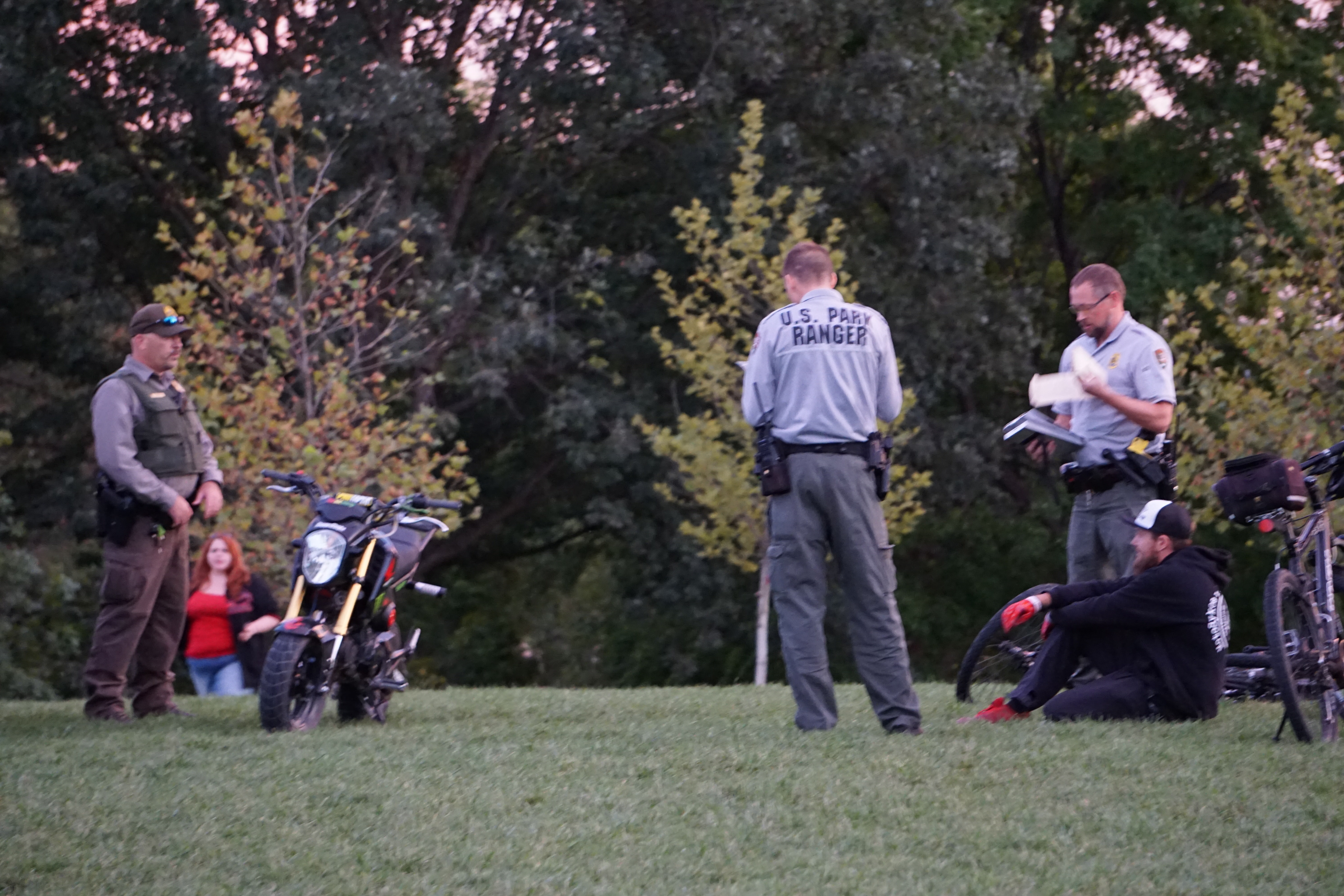 WASHINGTON PARK, Ill. - The mayor of Washington Park, Leonard Moore, plans to call for emergency assistance from neighboring municipalities to rebuild a municipal building that was engulfed by a fire Tuesday afternoon.

Mutual aid from State Park, French Village, Fairmont City, and Caseyville fire departments was called to fight the fire just before 2 p.m. The heavy, black smoke could be seen for miles.

PONTOON BEACH, Ill. - Tearful families from throughout the Metro East came to the Pontoon Beach Police Department Tuesday. They were mourning the loss of Officer Tyler Timmins.

Village hall was draped with black bunting and a police cruiser was covered in cards and flowers.

ST. LOUIS - A project in the works will bring Gospel Music Hall of Fame of Missouri to a historic church on North Kingshighway in Central West End and bring gospel music back to these walls.

"This building, in particular, has housed some of the greatest gospel singers and legends," Yolanda Yancie, a board member for Gospel Music Hall of Fame of Missouri and the St. Louis City 18th ward committeewoman said.

The plan is to turn the church into the hall of fame, with a cafe and event space, where people can explore and learn about Missouri's rich history of gospel music.

The more than 100-year-old building has been through a lot. Early Tuesday morning, a fire ravaged through the church's bell tower. Firefighters had to attack it aerially, which sent a lot of water into the church. There's no cause of the fire yet and the exact amount of damage hasn't been determined.

"First arriving units on the scene which is only about two blocks away, engine house 28, they reported heavy fire in a churchyard, church steeple, asked for a second alarm immediately because of the size of this fire," St. Louis Fire Chief Dennis Jenkerson said.