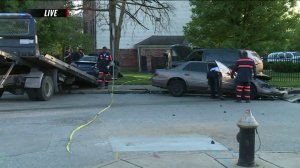 ST. LOUIS (KTVI) – St. Louis city emergency service are on the scene of an accident in north St. Louis that has sent 7 people to the hospital. Fire department officials say 3 vehicles were involved in the accident around 6:10 pm at the intersection of Julian Avenue and Hamilton Avenue.

The exact cause of the crash will have to be determined by St. Louis police, but witnesses I spoke with tonight say they normally see cars speeding in the area and say it was a matter of time before something this serious happened.

Witnesses say one vehicle was driving at a high rate of speed heading west on Julian at the same time another vehicle was heading south on Hamilton.  Then witnesses say they heard the collision and then saw flames and lots of smoke.  One woman who spoke to Fox 2, said she ran towards the scene to try to help anyone who was hurt.  Seven people were taken to the hospital, four of them with serious injuries, two of them with critical injuries.

At some point during the aftermath of the crash, witnesses say a fight broke out at the scene. We do know there was an officer in need of aid call, and we believe that officer injured a finger but will be okay.