Skip to content
Breaking News
Breaking News
Map of St. Louis area COVID-19 cases – MO: 786 deaths/ 13,767 cases IL: 5,736 deaths/ 124,759 cases.
Live Now
Live Now
Protesters hold ‘I AM George Floyd’ march in Brentwood
Watch Now
Watch Now
Live video of News 11
This is an archived article and the information in the article may be outdated. Please look at the time stamp on the story to see when it was last updated.

ST. LOUIS, MO – It is less than one week until the Great American Eclipse. NASA has released a new interactive, web-based 3D simulation, Eyes on the Eclipse, where you can click anywhere on the Earth to preview your view of the August 21, 2017 total eclipse. It will work in a web browser on your desktop, laptop, and on newer tablets and smart phones, either in iOS or Android. 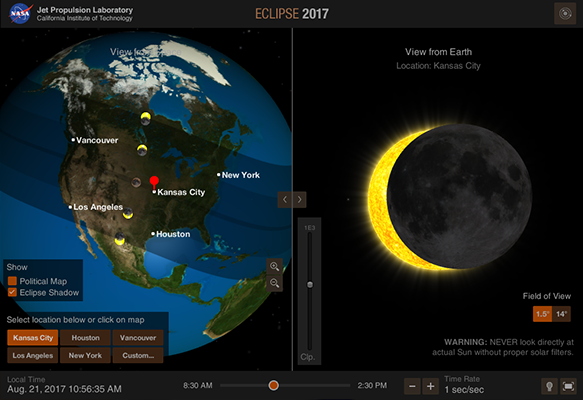 Once you enter the site, you will first see the Earth with the shadow of the moon on it. The largest circle is the part of the moon’s shadow, called the penumbra, which will partially block the sun. The smaller circle along the thin line in the center is called the umbra, and it is the only location where you can see a total eclipse of the sun.

Click and drag on the Earth to move it around or you can zoom closer to the surface. Click on any location to see an inset of the sun, and it will show how much the moon will block it during the eclipse. You can click and drag inside the inset window to change the time, or use the time bar to go forward and backward over the three hour and twelve minute time frame that the eclipse. Add the places you want to the list of cities, then you can easily switch between various locations.

Next to the cities list is an icon of the Earth. Click on it to select alternate views, like the perspective from behind the far side of the moon.

The upcoming Total Solar Eclipse is the first one to cross the entire country in 99 years. A Total Solar Eclipse is when the moon passes between the sun and the earth, blocking the sun from view as casting a shadow on the Earth.  If you’re in the dark part of that shadow, you’ll see a total eclipse. This will be the first total solar eclipse in the continental U.S. in 38 years. For most of greater St. Louis area, the last total solar eclipse was in 1442.

REMEMBER: DO NOT look directly at the sun during the eclipse without proper solar filters. You could severely damage your eyes.

NASA Maps of Path of Eclipse by state: https://eclipse2017.nasa.gov/eclipse-maps

Want to see if you’re in the path of the total solar eclipse?  Check out this map:

WACO, Texas (KWKT) – A missing Texas boy whose body was found in a dumpster may have been dead for four days before his mother reported him missing, according to police.

According to the arrest affidavit for Laura Sanchez, the mother of 2-year-old Frankie Gonzales, she called police on Monday, June 1st, saying the child had disappeared from Cameron Park in Waco.

LOS ANGELES (AP) — Gabrielle Union filed a complaint Thursday with the state of California against NBC and the producers of “America’s Got Talent,” the latest move in a fight over her allegations that she was fired for objecting to an on-set environment that tolerated racism.

The complaint filed with the Department of Fair Employment and Housing says Union was harassed and discriminated against because of her race, and experienced retaliation for reporting these problems.

This comes after six days of protests in the city against racism and police brutality in the wake of George Floyd's death. Northam said these demonstrations put 400 years of pain felt by African Americans in focus.

Watch: Protesters hold ‘I AM George Floyd’ rally in Brentwood