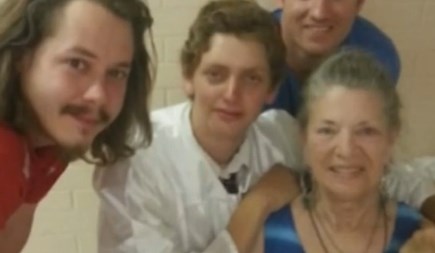 Phoenix, AZ (KTVK) — On Scott Kennedy’s home video, you can hear the sounds of chopper blades directly overhead and officers yelling commands across the street. Then, you hear gunshots.

Kennedy lives in the neighborhood of Tatum Boulevard and Deer Valley Road, the scene of the latest Phoenix police officer-involved shooting.

“I look down the street and there’s a young man walking down in complete fatigues, a military outfit, well kept, and boots, and he had backpack, and he had in his right hand, he had a pistol to his head,” Kennedy said.

“For me, it was very surreal. It took about a total of three or four minutes from the time I saw him to the time he was shot and collapsed, but he had some kind of issue,” Kennedy said.

Osterlind showed up at his 14-year-old female friend’s house after he had just completed basic training with the U.S. Army.

His mother, Lynette Robertson, is heartbroken.

She says she knew nothing about the relationship.

“Whatever you hear, you have to understand he was a Scooby-Doo pure soul. I mean, he was a good kid,” Robertson said.

Kennedy says Osterlind was staggering and seemed to be talking to himself when he walked up to the home.

He says Osterlind ignored numerous police commands to put down his weapon. Kennedy believes the officers did the right thing in this officer-involved shooting.

“I think we should be proud of how they acted and how they took care of that situation because, you know, it could have been worse. The girl could have been shot had they taken their time,” Kennedy said.

While the teen was not injured, her 12-year-old sister had a non-life-threatening gunshot wound to the leg. Police said Osterlind fired one round from his handgun as he fell to the ground, and the bullet entered the closed front door of the home and struck the girl.

CHICAGO (WGN) — The nationwide protests in the wake of George Floyd's death may be putting people in danger in ways they don’t realize.

As protesters march side by side, they risked spreading and contracting the virus that can now infect thousands of households.

ST. LOUIS – Some of the windows at Don Brown Chevrolet in south St. Louis have been broken out and already boarded up after the dealership was struck by vandals overnight.

According to a St. Louis police spokesperson, officers were notified of a burglary at the car dealer around 2:30 a.m. Tuesday. The dealership was one of 55 businesses affected.