ST. LOUIS COUNTY, MO – Sunday afternoon around 4:40 pm a North St. Louis County police officer was shot and killed.  The officer, Mike Langsdorf was shot inside Clay’s Food Market located in 6200 block of Page Avenue.  A call for an officer in need of aid was broadcasted from the store shortly after Officer Langsdorf arrived. 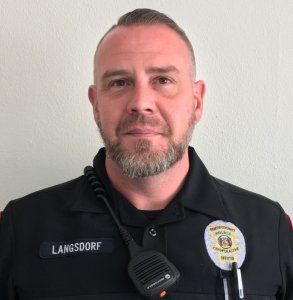 Officers and EMS crews arriving on the scene were met by citizens in the store assisting the officer.  EMS crews aided the officer and transport him to Barnes-Jewish Hospital for treatment.

The North County Police Cooperative Chief of Police John Buchannan said Langsdorf had been with the department for 3 months and was at the store investigating a bad check complaint. Langsdorf was shot by a suspect who was attempting to cash the bad check. Buchannan also stated that a suspect was in custody and that a gun had been recovered at the scene.

Fox 2/News 11 has confirmed that the suspect is being held at the St. Ann Police Department.

St. Louis County Police tell Fox 2 that they are assisting the North County  Police Cooperative with the investigation.

Langsdorf, 40, had been with the North County Police Cooperative since April 2019 and had 17 years of police experience. He leaves behind 2 children, a fiance, and his parents.

Chief Buchannan says press conference will be held Monday at 11 am to release more details about the fatal shooting.