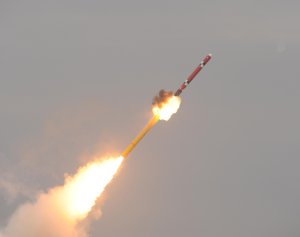 The test measured the thrust power in the combustion chamber, the structural safety and reliability of the engine, and the movement of the turbine pump, the Korean Central News Agency said. It reportedly took place at the Sohae Satellite Launching Ground, in North Pyongan Province.

“Some of these technologies which the North Koreans are including in their rocket expansion program actually have to do with a covert method of firing missiles without being detected in advance of actually exploding the devices. So that’s part of the issue,” Hertling said.

“The other piece is when you’re talking about an intercontinental ballistic missile, the types of warheads and the amount of weight that are in the missile itself have to be launched off of a pad. And the better they can improve their technology to do that, the more accurate these systems are going to be — not only from leaving the pad, but also going into the atmosphere and then hitting the target on the other side.”

State media said the test was successful and marked an event of “historic significance” that could lead to the rebirth of the country’s indigenous rocket industry.

North Korean leader Kim Jong Un ordered the start of the test and oversaw it from an observation post, the KCNA reported.

Although neither side brought up the subject publicly, Tillerson was expected to raise the prospect of financial penalties on Chinese companies and banks that do business with North Korea.

A spate of reported missile tests

North Korea has conducted a series of missile launches this month, including four on March 6, KCNA reported.

A North Korean military unit tasked with striking US bases in Japan was involved in those launches, the state news agency said.

But a fifth missile fired by North Korea failed. And that’s not an unusual outcome.

Still, the world is taking note that North Korea’s weapon technology may be improving.

As North Korea’s missile program gets more sophisticated, schoolchildren in Japan are preparing for attack.

On a recent sunny day in Oga, children playing duck-duck-goose on the playground stop in their tracks when an announcement blares over the loudspeaker:

“This is a drill,” the voice says. “A missile has been launched.”

The entire student body rushes to the school’s gym. At the end of the drill, a government official addresses to the students.

“The government is doing its best to be amicable to the countries so that the country would not shoot a missile,” Chief Cabinet Counselor Atsushi Odani said. “If they shoot a missile, (Japanese) self defense forces will try to shoot them down.”

The city of Oga, which juts out on a peninsula from Japan’s coast, has reason to be on guard. The Japanese government said three out of four missiles launched from North Korea on March 6 landed in the sea less than 200 nautical miles (around 370 kilometers) from Oga.

Police say the car was traveling south on Hillsboro Valley Park Road when it traveled off the right hand side of the road and hit a mailbox as well as several trees. The driver of the car, 20-year-old Mason Lilledahl of St. Louis, Missouri, was taken to an area hospital where he was pronounced dead.