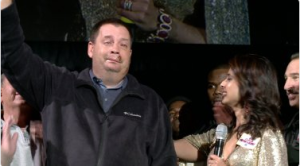 ST. LOUIS (KTVI) - It was quite a moment at the Scottrade Center when a wounded St. Louis Police sergeant decided to make a public appearance. He appeared on stage and waved to loud cheers. Sgt. Tom Lake also gestured to his heart in appreciate of the response from the crowd.

Brown was one of the boxers participating in the annual event.

“They make sacrifices every day so for me to come out and put on a show, it’s the least I can do.”

The widow of St. Louis County Police Officer Blake Snyder and her brother helped ring the 10 count which signaled the start of the matches.

Wednesday marked the 30th anniversary of the annual event.  The matches have helped raise $5.5 million dollars for Backstoppers, an agency that helps the families of fallen first responders.

The 2016 Guns ‘n Hoses event remembered 6 first responders who either lost their lives or suffered catastrophic injuries in the line of duty.

Wounded St. Louis Police Sgt. with our @jhuda at tonight's Guns 'n Hoses. He was determined to make an appearance. pic.twitter.com/jtvq7WXmAH

If you're interested in donating to our sergeant who was injured Sunday evening, info is below. We again thank everyone for their support! pic.twitter.com/FIXDELN2Fa

Boxing uniforms a throwback to the first @gunsnhosesstl in 1987 pic.twitter.com/dWaZOAKNAW

IRON COUNTY, Mo. – One of three men who escaped from the Iron County Jail over the weekend has been captured.

WILDWOOD, Mo. – A Wildwood family hopes their interview about the death of their loved one to cancer will save others. They spoke out to raise attention to other health threats impacted by the pandemic.

Joshua Hall was a miracle baby.

SULLIVAN, Mo. – A third grade Sullivan, Missouri girl has been swamped by phone calls from people in Arizona wanting a COVID vaccine.

Eight-year-old Sophia Garcia and her family moved from Arizona to Sullivan several years ago. She got a hand-me-down iPhone. It still has the Arizona number. That’s where the problem begins.

What are the effects of the mild, dry winter we’ve had so far?