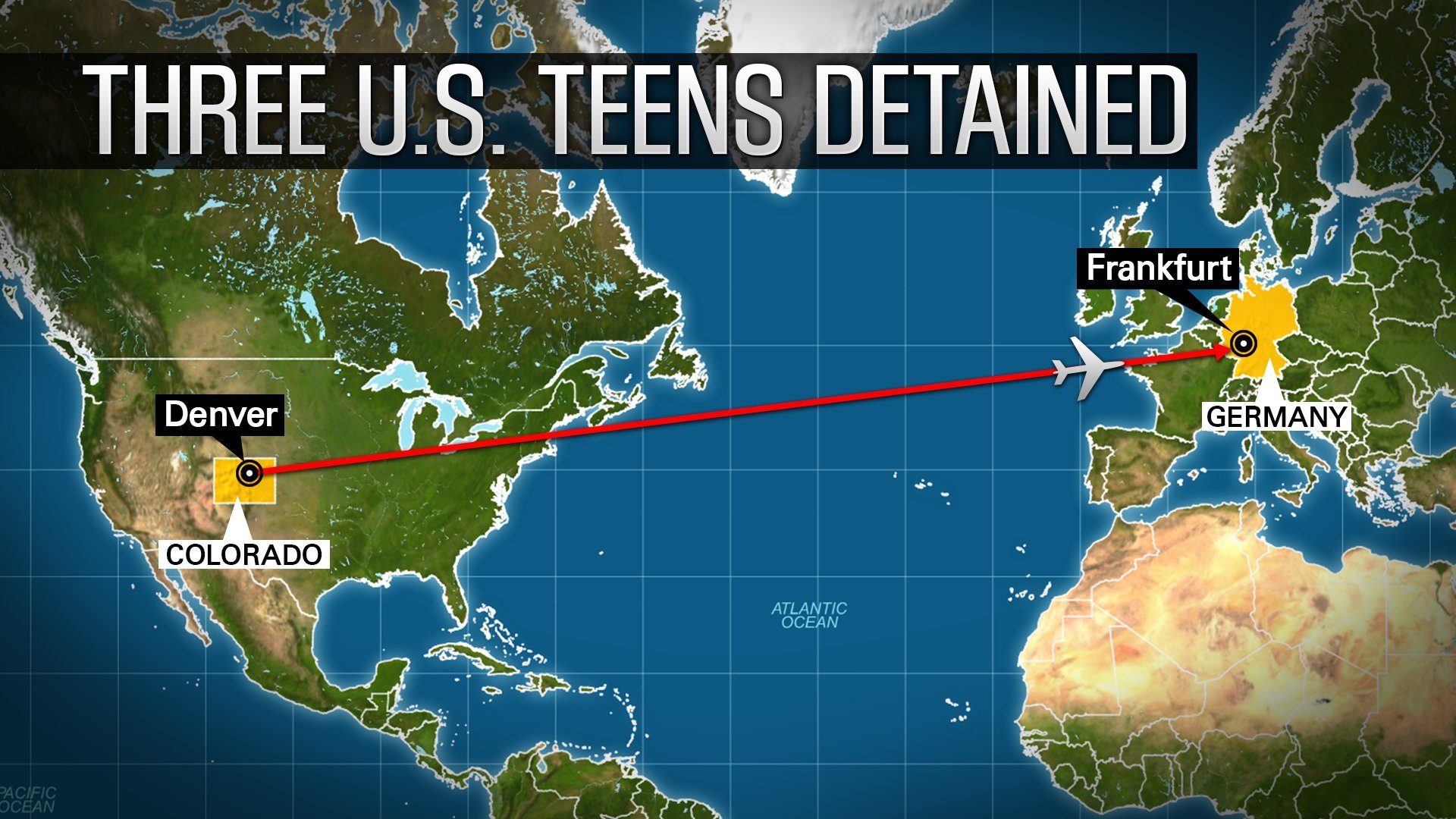 (CNN) — The first indication that something was wrong was a phone call from his daughter’s Denver area school to let Assad Ibrahim know that she had not come to class.

He dialed her cell. And she answered. But, officials say, she didn’t tell him that she was on her way to Syria to join ISIS.

She was just late for class, that’s all, Ibrahim’s daughter told him on Friday, according to the Arapahoe County Sheriff’s Office, which filed a runaway report.

The American girl of Sudanese descent also kept quiet about her two girlfriends, Americans of Somali descent, who were flying with her to Turkey by way of Germany.

Those two had told their father, Ali Farah, that they were going to the library.

But when Farah got home from work, a visitor came calling, according to the documents. Apparently, it was Ibrahim.

Farah should check to see if his daughters’ passports were missing, the visitor told him — just like his daughter’s passport was.

The two families called the FBI. They said they thought the girls were on their way to Turkey.

The agency put out a notice on their passports.

German authorities intercepted the trio, ages 15, 16 and 17, at Frankfurt airport and put them on a plane back to the United States, where they were greeted by FBI agents.

The three girls were questioned and released. Two U.S. officials say they had planned to join militants with ISIS, the Islamic State in Iraq and Syria.

Out of the blue

The girls’ parents say they had no idea their children planned to travel. None of them had ever run away before.

Their disappearance hit them out of the blue, the way other ISIS related incidents are popping up in the Western world. Two more turned up in tandem with the girls’ runaway attempt.

On Monday, a radical convert to Islam in Canada ran down two soldiers in his car, killing one of them. Martin Rouleau Couture, 25, then led police on a chase before his car rolled into a ditch in the town of Saint-Jean-sur-Richelieu, southeast of Montreal.

He exited the car, and police shot him dead.

Back in July, Couture, too, had tried to join foreign jihad, and Canadian police arrested him on his way to Turkey. But they could not charge him and had to let him go.

And this week, a video turned up of a 17-year-old Australian boy standing with ISIS fighters and threatening to behead Western leaders, including President Obama, then fly the ISIS flag over the White House.

ISIS has, for an anti-Western organization, been surprisingly attractive to young recruits from the West, as well as to some young women.

More than 100 of the foreign fighters have come from the United States, according to intelligence estimates; hundreds more from Europe, which is geographically closer to the fight.

“We know that over 500 British nationals traveled to join the conflict,” said Sir Bernard Hogan-Howe from the Metropolitan Police.

“Five a week doesn’t sound much, but when you realize there are 50 weeks in a year, 250 more would be 50% more than we think have gone already,” he said.

To put things into perspective, though, thousands more come from the Middle East and Africa. More than 3,000 have joined from Tunisia.

It’s more than just a radical interpretation of Islam that is drawing teens to the extremely bloodthirsty militant group, a former CIA officer says.

“They’re often times searching for an identity, because what the jihadis are actually pushing is a specific narrative, which is: Your people (Muslims) are being oppressed in this place called Syria; your government is doing nothing; we’re the only ones who are actually going to help you out,” said Aki Peritz. “Why don’t you join the fight?”

Richard Barrett of The Soufan Group says many of the teens lack a sense of belonging where they live, and they believe ISIS can give it to them.

“The general picture provided by foreign fighters of their lives in Syria suggests camaraderie, good morale and purposeful activity, all mixed in with a sense of understated heroism, designed to attract their friends as well as to boost their own self-esteem,” he says.

And ISIS constantly cranks the PR machine, making expert use of slick videos and social media.

ISIS’ global digital reach has terror experts in the United States worried about security at home as well.

There are terrorist groups in Yemen and in Syria with stated ambitions of striking on American soil, but another threat is more probable, says counterterrorism expert Matt Olsen.

“I would say the most likely types of attack is one of these homegrown violent extremists or lone offenders in the United States, and (with) the rise of ISIS and the number of people going to Syria…the likelihood does go up.”

Self-styled attackers like the Boston Marathon bombers could be the result.

The use of the Internet makes terrorists more vulnerable to tracking, but that has become more difficult since Edward Snowden revealed secret U.S. surveillance programs.

In Denver, the 17-year-old girl was apparently the instigator of the trip, having planned it for months, two U.S. officials said.

But all three researched the plan online, visiting websites where extremists discuss how to get to Syria. The online activity didn’t set off any tripwires the FBI typically uses to flag possible jihadist sympathizers, the officials said.

The FBI is combing all of their communications to see if anyone was helping them. Their parents think ISIS was behind the trip.

Investigators are also not sure the girls had even worked out the final goal for their travel.

As was the case with the Canadian, Couture, the investigation into the travel will probably not lead to charges, especially because the girls are minors, the two U.S. officials said.

On Monday, Sheriff’s Deputy Evan Driscoll visited the two girls of Somali descent in their home and had a conversation with them.

“The girls explained that they stole the $2,000 and their passports from their mother,” he wrote in the runaway report.

They wouldn’t tell Driscoll why they flew to Germany.

The deputy called dispatchers and had the girls’ runaway listing removed.

Sunflowers in yard may land St. Peters man in court