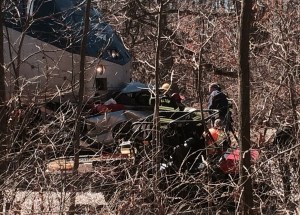 UPDATE:  80-year-old Henry Bloodworth has been identified as the man hit by a train in Alton on Sunday.

ALTON, IL (KTVI)-Alton police confirm that one person is dead after a pick-up truck was struck by an Amtrak train at the Humbert Road crossing Sunday morning.  The driver of the truck was killed.

Amtrak says the train was carrying 230 passengers and 12 employees at the time of the accident.

The scene is north of Homer Adams Parkway. The truck reportedly drove through the railroad crossing signal.

The Amtrak train was bound for Chicago, IL. No one on the train was injured.

According to officials the track was cleared at 1:30 pm, with Union Pacific Railroad making track repairs.

#amtrak train that collided w truck in Alton in position to remove the truck from train http://t.co/r9GPTDI8oD pic.twitter.com/f7AehIVL0D

One killed, three injured in shooting at north St. …

Rainscaping is a way to manage stormwater runoff

The warehouse fire in Madison, Illinois is under …

Anne Heche on life support, survival of crash ‘not …