OVERLAND, MO (KTVI) – Shaun Terry and girlfriend Holly Williamson loved riding dirt bikes. They were doing just that Saturday near Farmington when Terry was about to spring a surprise.

“I had the ring in my pocket,” Terry said.

But before Terry could propose to his girlfriend, she crashed. Williamson was airlifted to Mercy Hospital where she is in critical condition. Terry has remained by her side ever since.

“It’s pretty traumatic and kind of hard to bear, and hard to take a grasp of everything,” he said.

Terry said the support from family and friends has been greatly appreciated. His coworkers at the Overland Police Department wanted to find a way to help as well.

“My heart just sank and I wanted to do something,” said Overland Police Sgt. Theresa Cover.

Cover said whenever someone was looking for help Terry was one of the first to offer a hand. She believes it’s time to return the favor.

“He’s provided for our community and I think the community should definitely provide for him now,” Cover said. 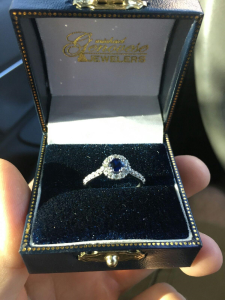 Williamson’s recovery is still uncertain, but Terry believes he will someday be able to give her the ring.

“She’s a spunky girl. She has a fight in her. She’s stubborn,” said Terry. “Once she gets the care they’ve given her here, she’ll turn around. She’ll come out of it.”

“If you pray, pray. If you hope, hope. If you wish good wishes, wish good wishes,” said Kyle Crangle, a friend of Terry’s. “If you can financially contribute, that’s awesome. If you can’t, we understand. Maybe see the link and share it. Maybe somebody else can.”

ST. LOUIS – The St. Louis Circuit Attorney’s Office charged a 35-year-old man with stealing a cellphone from a woman as she lay dying on a sidewalk outside Anheuser-Busch Brewery.

According to Evita Caldwell, a spokeswoman for the St. Louis Metropolitan Police Department, the theft happened Sunday, October 18 just before 1:15 p.m. in the 1200 block of Lynch Street, located in the Soulard neighborhood.

JEFFERSON CITY, Mo. – After a weekend that saw nearly 5,000 COVID-19 cases, Missouri health officials announced Monday a slight decline in new cases, though the 7-day rolling average is larger than even the worst times over the summer.

According to the Missouri Department of Health and Senior Services, the state has recorded 171,022 cases of SARS-CoV-2—an increase of 1,527 positive cases—and 2,810 total deaths as of Monday, Oct. 26. That’s a case-fatality rate of 1.64 percent.

How did your neighbors donate? Map breaks down Trump-Biden split by zip code

Some students returning to class in St. Louis Public Schools

A cold, wet, and dreary start to the week

Second stimulus checks: Here’s where we stand as a new week begins

How did your neighbors donate? Map breaks down Trump-Biden split by zip code