Hupp was taken into custody Tuesday morning by the O’Fallon Police Department. She is being held on $2 million cash only bond.

On August 16, O’Fallon police received an initial call for help at 12:10 p.m.  A second 911 call was made a short time later from Hupp.  When officers arrived at the O’Fallon home on Little Brave Drive, Hupp told them that a man approached her in the driveway and followed her into her home. She said she was able to retrieve a gun and shot the intruder, who was later identified as  Gumpenberger. An autopsy determined he had been shot at least twice.

St. Charles County Prosecuting Attorney Timothy Lohmar stated at a news conference Tuesday that the investigation revealed that Hupp had sought out Gumpenberger and brought him back to her home  on the day of the shooting. Gumpenberger had $900 and a handwritten note in his pockets at the time of his death. The note listed instructions to kidnap Hupp, get “Russ’ money,” and then kill Hupp. Investigators believe Hupp placed those items on Gumpenberger after his death.

The investigation also revealed that on August 10, 2016, an O’Fallon woman was approached by another woman in an SUV claiming to be a Dateline NBC producer working on a story about 911 calls. The woman initially agreed to be part of the story, but them demanded to be taken back home after the woman in the SUV could not produce credentials. That woman later was able to identify the woman in the SUV as Pamela Hupp.

Shooting victim Louis Gumpenberger was from Union, Missouri. He has recent listed addresses in several places, including Bel Ridge, St. Charles and two locations in O’Fallon, Missouri. He was scheduled for a job interview the following day at a St. Peters business that helps disabled people. Gumpenberger’s ex-girlfriend, Shannon Zoll, said he suffered nerve damage after a car accident 11 years ago, adding that he has a noticeable limp when he walks.

Pam Hupp was a central figure in a highly publicized Betsey Faria murder trial, covered extensively by Fox 2 News. Betsy’s husband, Russ, was first convicted and later exonerated of her murder after new evidence surfaced. The evidence involved $150,000 in life insurance proceeds, signed over into Hupp’s name days before Betsy’s murder. Hupp was never named as a suspect during the Faria investigation.

To read more about the Faria murder trial, click here.

Below is the Probable Cause Statement regarding the death of Louis Gumpenberger and the charging of Pamela Hupp as issued by O’Fallon, MO Police and the St. Charles County Prosecuting Attorney. 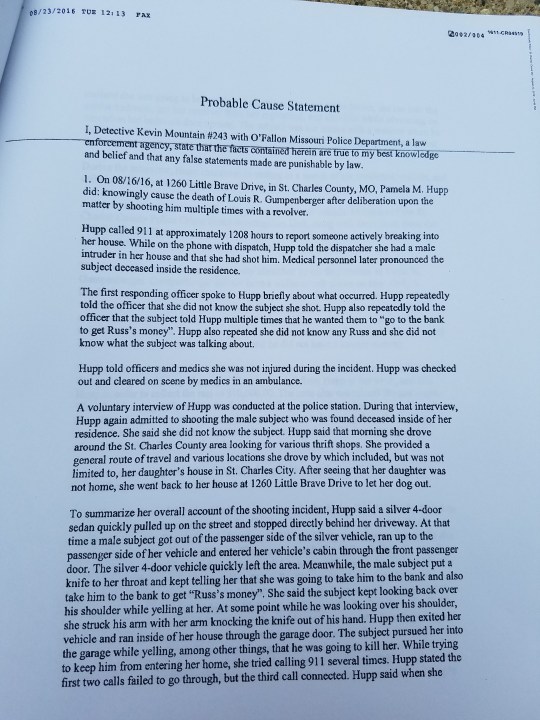 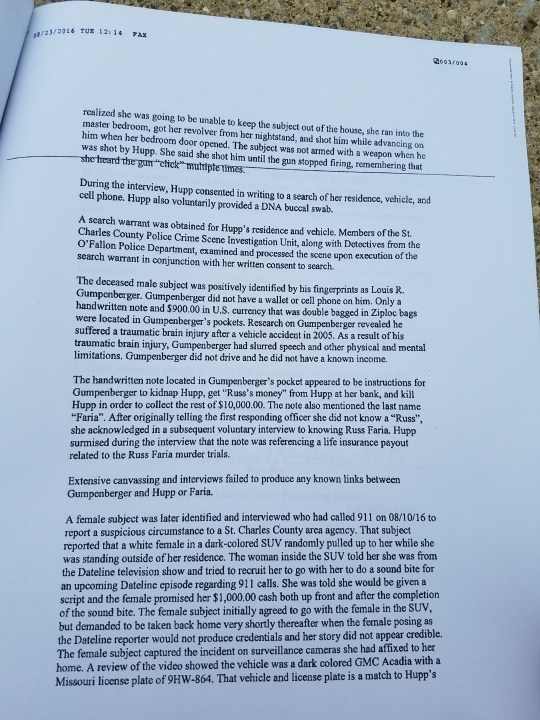 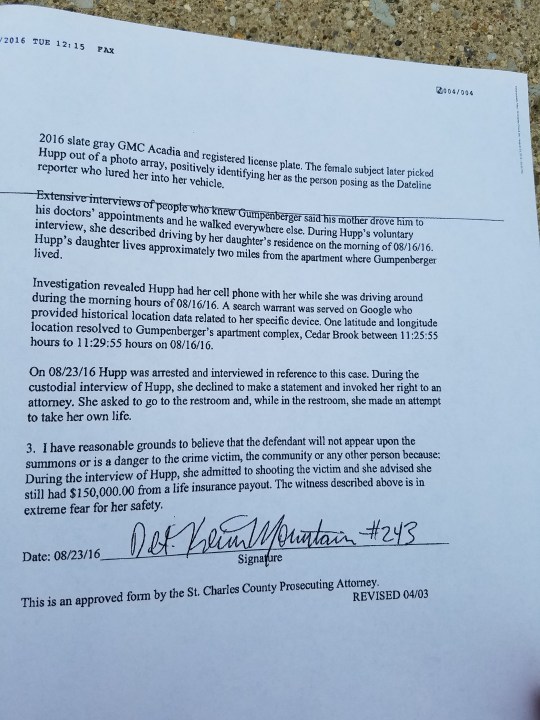