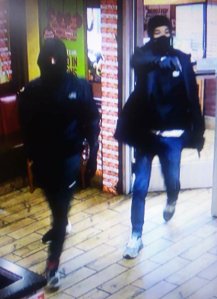 Both men accused in a fatal robbery at a Denny’s restaurant in Virginia have been arrested and charged, police say.

Anderson is charged with murder, malicious wounding and two counts of using a firearm in commission of a felony. He is being held without bond and is scheduled to appear in court February 6.

It could not be immediately determined Sunday whether Anderson or Walker had retained an attorney.

Authorities said Anderson and another suspect robbed the Denny’s early Thursday and “ordered the patrons of the restaurant and employees to the ground while demanding their cell phones and wallets,” police said.

As the robbers were leaving, police said, they shot one man who was sitting on the floor and cooperating. That man is expected to survive.

Afterward, DoorDash food delivery driver Yusuf Ozgur “was walking into the Denny’s and unknowingly held the door for the suspects as they exited,” police said.

One gunman struck Ozgur with a baton and the other shot him, police said. The 56-year-old driver died at a nearby hospital.

Prince William County Police Chief Barry Barnard said there may be a link between this heist and three other recent robberies in the area.

BETHALTO, Ill. – Police have captured a suspected car wash bandit who'd been stealing from area car washes. He used a Budget rental truck in the crimes. Not long after our initial report on Tuesday night, the truck was spotted again.

The truck has now been impounded by Bethalto law enforcement.

ST. LOUIS - Groups providing support for domestic violence victims are concerned about the level of deadly violence they have seen in recent years. Representatives from several agencies gathered Thursday night at Strauss Park in Grand Center to remember victims and raise awareness.

The owners of Nuby's Steakhouse in Pocahontas, Illinois, and E. L. Flanagan's in Highland, Illinois, said they haven't been able to serve chicken wings like usual in their restaurants. The owners said they've been dealing with a chicken wing shortage from their suppliers.

California goes from worst to first in COVID infections

Video: California deputy shoots Black man within a minute of arriving at scene

The steps St. Louis is taking on the road to reopening

Sen. Hawley says it is time for the federal government to reopen in-person offices