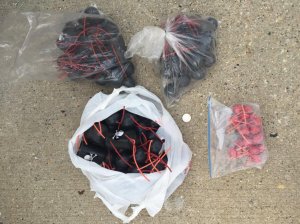 McLean County Assistant State’s Attorney Emily Young says police found 128 explosives devices each containing about a half-ounce of dynamite or explosive powder from the home of 32-year-old Gilbert Wilson. Prosecutors say police also found about 19 ounces of marijuana and items used to package drugs for sale. Young says Wilson was “vague about the explosive devices and what he intended to do.”

A bomb squad took the explosives for destruction. Wilson’s bond was set at $25,000.

ST. LOUIS - Police have arrested a St. Louis homeowner who shot and injured a would-be burglar trying to steal copper.

The man was alerted by his alarm company to the break-in at his rental property located on Beacon Avenue near West Florissant around 3:00 a.m. Wednesday.

The owner had boarded up the Hollywood Beauty on Gustine Avenue after his other location was looted Monday night.

ALORTON, Ill- Police are searching for several suspects who attacked a man and woman early Thursday morning in Alorton, Illinois.

The incident happened outside the Flying J Truck Stop on Racehorse Drive just before 1:00 a.m. Police say, the suspects beat and pistol-whipped the man before stealing his pick up truck and breaking into his friend's car.