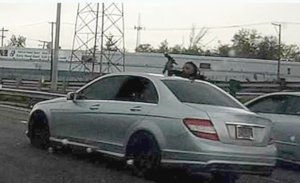 Update:  Police are searching for a suspect in connection to this shooting.  They sent a photo of the person and need your help to identify him. Anyone with information is asked to call CrimeStoppers at 866-371-TIPS (8477).

ST. LOUIS – A shooting on I-70 has left a woman in critical condition. The shooting is being investigated by the St. Louis police department.

The incident happened around 4:15 pm on Tuesday afternoon when a woman told police someone shot at her while she was driving on Interstate 70.

From Bommarito Automotive SkyFox we can see where the shooting happened on Interstate 70 near West Florissant. A 27-year-old woman told police she was driving westbound on the highway when someone in a silver Mercedes Benz started shooting at her car. She was shot in the lower back and arm and was taken to a hospital in critical but stable condition.

Police say the woman did not recognize the man who shot her.

An investigation is ongoing.

ST. LOUIS - Under a much different set of circumstances, a fuming Cardinals manager stormed off after reporters asked questions about a slow start to a season. It was April 6, 2011, when Tony LaRussa uttered a phrase that has lived on in radio mic drops almost a decade later.

"It's the first week of the season," he said repeatedly.

“I would much rather vote for liberty and lose than vote for tyranny and win,” said one speaker at the rally.

WASHINGTON – The Internal Revenue Service announced Friday that the deadline to claim a $500-per-child stimulus payment as authorized by the CARES Act has been extended.

The IRS is encouraging eligible recipients to use the IRS.gov Non-Filers tool starting August 15 through September 30 to receive the supplemental $500 payments.

After declining, Covid-19 cases are rising again in US nursing homes