CLAYTON, MO (KTVI) - Fox 2 News has confirmed a door slam sliced off part of a news reporter's finger during a courthouse confrontation in Clayton.

The court case may mean the end of a troubled motel in Sunset Hills and cost an estimated 20 families their homes.

They’ve been living at the EconoLodge in Sunset Hills but probably not for much longer after a court order filed Wednesday, placed the business in receivership. 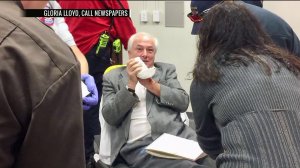 Gloria Lloyd with Call Newspapers shared a photo with Fox 2 of Tim O’Neil, a long-time reporter with our partners at the Post-Dispatch.  O’Neil was nursing his wounded finger and headed to a hospital for treatment.

O’Neil was covering the EconoLlodge saga, which had shifted to the St. Louis County Courthouse.

The motel’s owner, Shaiq Amir, called police hoping to run off a Fox 2 crew that arrived to follow up on the story.

Sunset Hills Police had 349 calls here in a recent one-year period, a Sunset Hills Alderman said, including calls for a deadly heroin overdose and suspected prostitution and sex trafficking.

He didn’t want to move and stood by Amir.

“[The court order] is very unfair,” he said.  “He’s a good man.  He’s rebuilding the place, actually.  He’s got almost all the first floor rehabbed.  He was starting on the second when all this began… most of us who live here, we have all our property in our rooms.  So, if we’re thrown out and have to go to a shelter or move to the streets, we have to leave all that behind.”

The court order appoints Midas Hospitality” which operates at least Holiday Inns and Fairfield Inns among others in 13 states including Missouri and Illinois, as “receiver”, to run the EconoLodge until Amir sells it.

It isn’t sold in 60 days, the parties will head back to court, the alderman said.

O’Neil was covering the court case and told the Post-Dispatch that Sunset Hills City Attorney, Robert Jones, slammed a door on O’Neil’s finger in a dispute over public access at the courthouse.

Doctors were reportedly trying to re-attach that part of O’Neil’s finger, Wednesday.  There was no word on whether they were successful.

Clayton Police are investigating the incident.