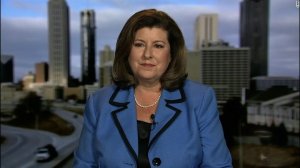 ROSWELL, Ga. (AP) _ Republican Karen Hndel has won a nationally watched congressional election in Georgia and avoided a major upset after the most expensive House campaign in U.S. history.

Republicans are claiming momentum ahead of the 2018 midterms, but each race was much closer than expected for the four districts.

Those trends leave Democrats hopeful they can win a House majority next year. They need to flip 24 GOP seats.

The 55-year-old Handel is a former Georgia secretary of state who built her professional and political career after leaving an abusive home as a teenager. She succeeds Republican Tom Price, who resigned to join President Donald Trump’s administration.

Atlanta congressman and civil rights icon John Lewis is revving up the crowd at the election night party for Democrat Jon Ossoff.

The 77-year-old congressman on Tuesday recalled a letter a young Ossoff wrote to Lewis asking for a Capitol Hill internship. Now Ossoff is a 30-year-old Democrat running for Congress himself.

He’s trying to pull a major upset in the suburban Atlanta district north of Lewis’ 5th District. Ossoff is running against Republican Karen Handel, who is trying to hang on to a district her party has controlled since 1979.

Lewis is praising Ossoff supporters for making “a major down payment on change not just in the 6th District but … in our nation.”

The Republican candidate made a brief appearance shortly before 8 p.m. as her supporters gathered at a hotel ballroom in Atlanta and chanted “Karen! Karen! Karen!” at her entrance. Handel says there is a long way to g and urged her backers to stay and watch returns come in.

Handel faces Democrat Jon Ossoff in the race for Georgia’s 6th Congressional District and is trying to hold on to a district her party has controlled since 1979.

Most polls have closed in Georgia for a special congressional election that offers a potential preview of the 2018 midterm elections.

Republican Karen Handel and Democrat Jon Ossoff are expected to have a tight finish in the area’s traditionally conservative northern suburbs.

Ossoff wants an upset that would rattle Washington ahead of next year’s elections. A Republican has represented Georgia’s 6th Congressional District since 1979.

Turnout could exceed 250,000 votes, an impressive total for a special election, and its already the most expensive House race in U.S. history.

Richard Barron, director of Fulton County’s registration and elections, says the state’s most populous county is on pace to have around 36,000 people come through when polls close at 7 p.m. Tuesday. He says about 16,500 people had already voted by 12:30 p.m.

Barron says there have been a couple of voting issues, but it’s nothing that would derail having final results in by 11 p.m. He says one of the most common complaints has been from poll workers canceling people’s absentee-by-mail ballots at polls.

In the April 18 general election, state officials reported polling machines used to check in voters at one precinct in Johns Creek weren’t working properly, but the problem was resolved.

Election officials for a Georgia county in the 6th Congresional District say two polling places will stay open late after an equipment problem delayed the start of voting.

DeKalb County officials said the problem was resolved by 7:30 a.m. but they want voters to have a full 12 hours to cast ballots in the runoff between Republican Karen Handel and Democrat Jon Ossoff.

An election official in Georgia’s most-populous county says he’s aiming to have final results in by 11 p.m. Tuesday in Georgia’s closely-watched congressional election.

That would contrast with last April, when Fulton County could not report vote totals for several hours after polls closed in the special election in Georgia’s 6th congressional district. That contest led to Tuesday’s runoff between Republican Karen Handel and Democrat Jon Ossoff.

This time, county officials are optimistic they will have more timely results.

Richard Barron, director of Fulton County’s registration & elections, says that although 11 p.m. is his goal, “accuracy is paramount.”

The county scheduled a briefing Tuesday afternoon to update reporters on its role in the election.

Portions of Fulton, Cobb and DeKalb counties are included in the 6th Congressional District.

A spokeswoman for Georgia’s top election official says voting in the state’s closely-watched 6th District is going smoothly but some issues have been reported.

Two voting locations in DeKalb County had the wrong equipment used to check voters in. Workers had to use paper listsas a backup.

Secretary of State spokeswoman Candice Broce said some voters were told to use provisional ballots. She wasn’t sure how many people were given those directions. Broce says DeKalb officials are considering whether to ask a judge to extend voting hours at the Livsey Elementary School and Embry Hills polling places.

Broce says investigators from the Secretary of State’s office are reviewing the issue. An investigator also went to a church in Cobb County after a complaint that campaigns signs were too close to the location.

As voting got underway in Georgia’s closely-watched Congressional race, the state’s chief elections official posted a video on social media urging voters to head to the polls and “wear your peach voting sticker with pride.”

Georgia Secretary of State Brian Kemp said in the Facebook video Tuesday morning that Georgians’ right to vote for their public officials should never be taken for granted.

Either Republican Karen Handel will claim a seat that’s been in her party’s hands since 1979 or Democrat Jon Ossoff will manage an upset that will rattle Washington ahead of the 2018 midterm elections.

Their matchup in Georgia’s 6th Congressional District has become a proxy for the national political atmosphere and a test of GOP strength early in Donald Trump’s presidency.

As the most expensive House race in in U.S. history goes into voters’ hands, President Donald Trump has taken to Twitter to weigh in on the closely-watched election.

In one early Tuesday tweet, Trump criticizes Democrat Jon Ossoff, saying he’ll raise taxes, is weak on crime and “doesn’t even live in district.” Ossoff lives in Atlanta, south of the suburban district. He has said the address is close to Emory University, where his fiancee attends medical school.

In another tweet, Trump praises Republican Karen Handel as a hard worker who will fiht for lower taxes, great health care and strong security.

The matchup between Ossoff and Handel has become a proxy for the national political atmosphere and a test of GOP strength early in Trump’s presidency.

Trump barely won the district in November, giving Democrats an opening once Republican Tom Price resigned the seat to join the president’s Cabinet as health secretary.

The most expensive House race in U.S. history heads to voters Tuesday in suburban Atlanta.

Either Republican Karen Handel will claim a seat that’s been in her party’s hands since 1979 or Democrat Jon Ossoff will manage an upset that will rattle Washington ahead of the 2018 midterm elections.

Their matchup in Georgia’s 6th Congressional District has become a proxy for the national political atmosphere and a test of GOP strength early in Donald Trump’s presidency.

Ossoff led an April primary but fell just short of an outright victory, sending an already costly race into a two-month runoff campaign.

Trump barely won the district in November, giving Democrats an opening once Republican Tom Price resigned the seat to join the president’s Cabinet as health secretary.

ST. LOUIS - For fans of the movie National Lampoon’s Christmas Vacation and the Griswolds, Sam's club is creating a virtual shopping experience inspired by the family's Christmas themed home.

The experience will include trivia, interactive elements, and places for viewers to shop for toys, food, and more.

ST. LOUIS- St. Louis area hospitals are reporting six straight days of new COVID admissions over the 40 patient mark. That has not happened since the beginning of the pandemic.

Today's report says there were 55 new admissions, up from 42 the day before. The task force has used 40 as its benchmark to determine when cases are becoming a growing concern for the area.

In the tweet, she says,"If you're having a bad day, just think of all the social services we're going to fund after we defund the Pentagon".

Illinois shares the science behind its mitigation efforts