Skip to content
Breaking News
Breaking News
IL: 47 deaths/3,491 cases; MO: 10 deaths/838 cases. List of St. Louis area coronavirus disruptions
This is an archived article and the information in the article may be outdated. Please look at the time stamp on the story to see when it was last updated. 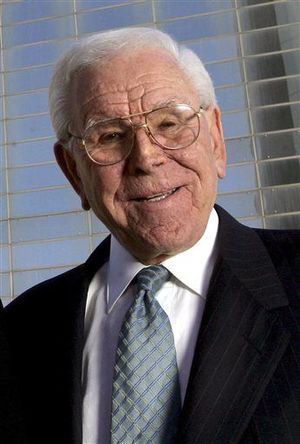 ARTESIA, Calif. (AP) _ The Rev. Robert H. Schuller, the Southern California televangelist who brought his message of “possibility thinking” to millions, has died in California. He was 88.

Schuller started preaching in 1955 at a rented drive-in theater. In 1970, he began a TV ministry called the “Hour of Power.” In 1980, he built a soaring glass cathedral to house his booming ministry.

At its peak, the program reached 20 million viewers.

In 2006, Schuller’s only son, Robert A. Schuller, was installed as senior pastor. But the organization was hit by falling membership and revenue, and he left in 2008.

The church filed for bankruptcy in 2010, and Schuller resigned from the board in 2012.

WASHINGTON ( NEXSTAR) - Treasury Secretary Steven Mnuchin spoke to reporters Sunday morning saying Americans should start to see checks from the $2 trillion stimulus bill direct deposited into their accounts over the next three weeks.

Mnuchin said there would be a web-based application for anyone who doesn't receive direct deposits, according to CNN.

AUSTIN (KXAN) — College entrance exams and advanced placement classes are being altered due to the COVID-19 pandemic, the Texas Education Agency said.

College Board and ACT are suspending SAT and ACT testing until June. Those who registered for the tests and had them canceled will receive a refund, the TEA said in a press release.

LITTLE ROCK (KLRT) — A Little Rock woman is speaking out after she says her sister died of COVID-19 Saturday morning. This is one of five COVID-19 deaths across the state.

Just two weeks ago, Latia Wright got a call from her sister Tanisha Cotton saying she was feeling a little sick.

‘Off the charts’: Virus hotspots grow in middle America