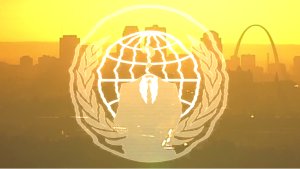 ST. LOUIS, MO KTVI – Scott Air Force Base has posted a warning to Facebook about a possible protest this Friday at the St. Louis Arch. The “Day of Rage” protests are planned at the same time in cities across the United States.  A group calling itself part of “Anonymous” is planning protests on Friday, July 15th to stand with the Black Lives Matter movement.  Other members of Anonymous say the planned protests are not going to happen.

Scott Air Force Base origionally posted this message to Facebook at around 10am Thursday:

“Please be advised that the Air Force Office of Special Investigations has posted a safety warning not to be at the Gateway Arch in St. Louis, at 6 p.m. on Friday, July 15 due to potential protests and criminal activity. Please be safe and avoid this area during that time.”

They have updated the post since it went viral with this message:

St. Louis Police say they are aware of the social media surrounding the event.  They posted this message to Facebook Friday:

“We are aware of circulating social media posts regarding a ‘Day of Rage’ protest event scheduled for this evening, Friday, July 15. The department has been aware of this event for some time. The ‘Day of Rage’ event is a yearly event held in most major cities across the country. The event was held last year in St. Louis and a small number of individuals attended, with no issues or arrests made. As always, the department is prepared to respond to any possible unrest that may arise. At this time, there are NO credible threats to our City and no reason to avoid Downtown St. Louis and everything it has to offer!”

The potential protests are in solidarity with the Black Lives Matter movement and the victims of police brutality. It is a reaction to last week’s officer involved shootings of Alton Sterling and Philando Castile. This is part of a release Anonymous posted to YouTube on Saturday:

“We are calling on a collective day of rage. A day of action centered around civil disobedience and the right to protest.

To police departments across the United States. We are not your enemy. However, it is in your hands if you want us to stay that way or not. We will not be silenced and we will not be intimidated.

To the St. Anthony and the Baton Rouge Police Departments, we’ve already launched attacks on your virtual infrastructure. We are prepared to release every single piece of evidence that will expose your corruption and blatant disregard for human life.

Once again we are calling upon the citizens of the United States, in conjunction with the Black Lives Matter movement as well as other civil rights activists, to participate in a day of action against the injustices of corrupt officers. On Friday, July 15th, we will all flood the streets at strategic locations in order to maximize our voice. The locations and times will be located in the description below. Tell your family, tell your friends. We will change the world together. Our freedom depends on it.”

The whole thing is a little confusing. Will there be protests across the country on Friday?  An Anonymous Twitter account says that there is no “Day of Rage.”

There is no such thing as an ''Anonymous day of rage" TheAnonMessage isn't a credible source, he has been spreading false information before

Snopes dug into the likelihood that there will be a “National Day of Rage” planned by Anonymous. They point out that this event is, “Virtually identical to one that was circulated two years earlier after the shooting of teenager Mike Brown in Ferguson, Missouri. As we pointed out back then, one of the key aspects of Anonymous is its amorphous nature and overall lack of central organization; as such, anyone can initiate an Anonymous “operation,” and none is ever officially sanctioned by any particular portion of the collective.”

Anonymous has no leaders.

Anonymous is not organized by anyone.

Anonymous can be anything, or it can be nothing at all.

But, this is the video Anonymous posted to YouTube last weekend. Warning: Some of the images and language used in this video may be offensive to some viewers:

These are the locations and times listed for the protests:

‘We felt it’ 2.5M quake along the Mississippi River

New cohort of the UMSL Accelerate Program wants to …

Man shot and killed after charging at officers in …

Who is Missouri’s new attorney general, what are …

‘We felt it’ 2.5M quake shakes along the Mississippi …

Caught on camera: Fight broke out between staff member …

‘We felt it’ 2.5M quake along the Mississippi River

Best gifts on sale today for under $50