ST. LOUIS, Mo. — The Lincoln County Sheriff’s Office released the Major Case Squad portion of the 2011 Betsy Faria murder investigation Monday. However, every piece of evidence collected by Lincoln County that led to a wrongful arrest is missing from the release. All of the follow-up Pam Hupp interviews in which she changed her story are also missing from what was release.

Hupp submitted an Alford plea this summer. She admitted that the state of Missouri had enough evidence to convict her of the 2016 murder of Louis Gumpenberger.

Now Betsy Faria’s murder case is being reopened. She was murdered on December 27, 2011. Her husband, Russ, found her stabbed approximately 55 times in her Troy, Missouri home. The case has gained international attention with network specials and high profile podcasts detailing the series of murders that surround Pam Hupp.

Fox 2 was the only station to cover the 2013 trial in which a jury convicted Russ Faria.

Faria served more than three years in prison while Fox 2 revealed evidence of his airtight alibi – his cellphone records placing him far from his wife’s murder. We also showed how Hupp went out of her way to drive Betsy home the night of the murder and also benefitted from Betsy’s life insurance policy, which had just been signed over to her.

Lincoln County withheld its own investigative records, including dozens of crime scene photos that helped exonerate Faria once they were uncovered in the 2015 retrial. Those pictures revealed a lack of blood evidence deputies claimed at the first trial. The investigators and prosecutor claimed the pictures did not exist.

Betsy Faria was already dying of cancer in 2011 with possibly just months to live. Hupp had just dropped her off at her home.

Pam Hupp then benefitted from Betsy’s $150,000 life insurance proceeds signed over to Hupp just days before the murder. A judge found Russ Faria not guilty in 2015.

LCSO also withheld written reports as well as audiotaped Pam Hupp interviews in which she not only changed her story but was also coached by investigators. You can hear it on tape as featured in a previous Fox Files report.

So far, the Lincoln County Sheriff’s office won’t answer why it’s only sharing part of the evidence. The office is currently the target of a civil lawsuit filed by Russ Faria.

See all of the interviews and evidence from the Major Case Squad investigation here.

The document of the initial interview with Pam Hupp begins:

“Pamela Hupp said she has known Elizabeth “Betsy” Feria for approximately 10 years and further said they saw each other almost every day. When asked if she would describe their friendship as being best friends, she laughed and said Betsy had a lot of best friends ‘zillions of best friends.'”

Police asked Hupp if she thought Betsey Faria may have committed suicide. The report states:

“She said she didn’t think so. She said she had been depressed. but did not think she was capable of killing herself. She said they were both Catholic and serious about it. When asked if she could think of anyone who would want to hurt Faria, she said she couldn’t and further advised Faria had “zillions” of friends. She described her as being the nicest and sweetest person. When asked if Faria expressed any concern about anyone else who may want to hurt her, Pamela Hupp told us that just recently, Faria became afraid of her husband, but she had been throughout their marriage. She advised that was why they separated a lot. When asked how she would describe their marriage, she said it was not a marriage and they really didn’t live together. She said when Faria got back with her husband, it was for financial reasons.”

Pam Hupp tells police that Betsey Faria was thinking about leaving her husband:

“Pamela Hupp said Faria’s husband was not nice to his wife which made his wife’s friends uncomfortable. She said she had heard hint verbally abusing her in the past. She described him as being pompous, but in the next breath said he seemed nice enough.

“Pamela Hupp said Faria told her last week she was thinking about leaving her husband. Her cousin, or friend, from England, Linda, was going to leave her husband also. She said they were going to leave the husbands at the same time and move to Branson. She described Linda’s husband as being an alcoholic, but advised she had only met Linda once. She said Linda lived in the South County area.”

Why did Pam Hupp get the insurance money after Betsey Faria was murdered?

“Pamela Hupp said Faria told her she wanted her kids to have her life insurance money and did not want her husband to have the money, because that was all he was talking about… Pamela Hupp said Faria was scared he wasn’t going to pass out the money. She told Faria she could divide the policy however she chose and she should know that. She told Faria if her husband gave her mother money, he would have to pay taxes, because it was more than a gift allowance. Faria told her that her husband didn’t want her to hand out the money, because he wanted to do it.”

A polygraph test of Russ Faria is listed among the documents.  He says that he not kill his wife or know who did kill her.   But, the examiner said that he was deceiving them.

A polygraph examination was planned for Pam Hupp.  Her attorney told them that they needed to postpone the exam until he can be with her.  They later determined that a doctor’s note was needed.  She had a previous head injury and was taking medication and could have seizures.  A polygraph test of Pam Hupp is not included in this report. 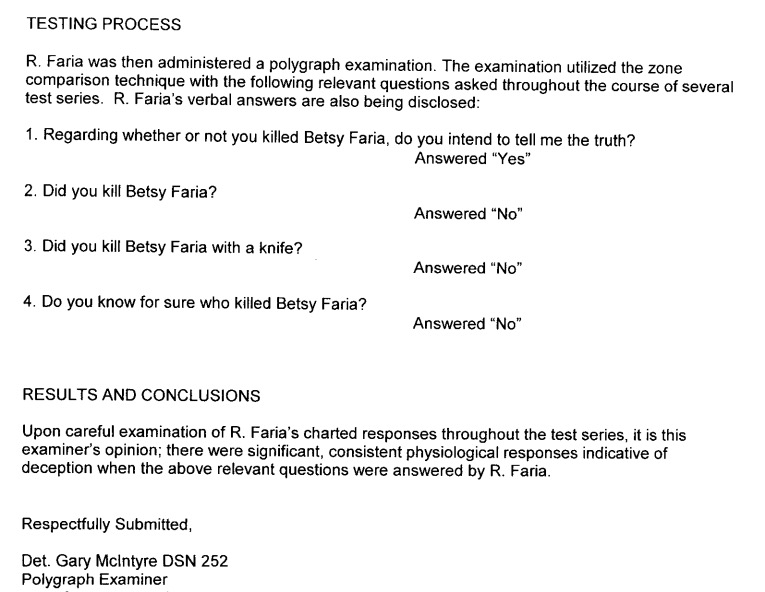 We continued our reporting, including investigating the bizarre death of Hupp’s mother—her unexplained fall through the railings of a third-floor balcony—and her life insurance proceeds.

St. Charles County prosecutors said Hupp wanted to escape the heat, so she plotted the murder of a random person in order to frame Russ Faria.

Hupp will spend the rest of her life in prison after admitting that prosecutors had evidence to convict her of killing a Gumpenberger. She could have faced the death penalty if convicted of the first-degree murder of 33-year-old.

Pam Hupp submitted an Alford plea this June. She admitted that the state of Missouri has enough evidence to convict her of the 2016 murder of Louis Gumpenberger. She shot him to death in her home.

Russ Faria said his attorneys, Joel Schwartz and Nate Swanson, have already set up an appointment with the prosecutor to go over the evidence. After Wednesday’s plea hearing, he pulled no punches about his opinion.

“It all started with her framing me for the murder of my wife, who she murdered,” Russ said.

Nearly eight years have passed but Wood said it’s not too late to find the truth.

“It’s never too late. What I want to show is we can look at what we’ve got. I can’t make any guarantees on where it will go but we will at least work with what we have and do the best we can,” he said.

Strange timing on the Lincoln County Sheriff's Office release of the Major Case Squad Faria Murder investigation. I've had it since 2013 – along with the Sheriff's Office's investigative materials (which it's withholding in this release). https://t.co/ryptNx3o23)

Residents worry about safety after officers were …

Residents worry about safety after officers were …

Missouri chateau one of the largest homes in America