Skip to content
Breaking News
Breaking News
Map of St. Louis area COVID-19 cases – MO: 1,051 deaths/ 25,999 cases IL: 7,119 deaths/ 150,450 cases.
Watch Now
Watch Now
Live video of News 11
This is an archived article and the information in the article may be outdated. Please look at the time stamp on the story to see when it was last updated. 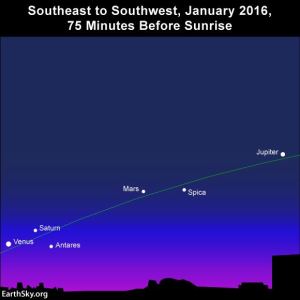 If you don’t mind getting up a bit early — or sneaking out of the office if you work the overnight shift — the skies are offering a very special treat for the next few weeks.

From January 20 to February 20, you can see five planets spanning the sky together just before dawn: Mercury, Venus, Saturn, Mars and Jupiter will all be visible about 45 minutes before sunrise.

This is the first time all five of the so-called naked-eye planets have appeared together in the pre-dawn sky in more than a decade, according to Sky and Telescope.

The group got the name “naked-eye planets” because you can see each of them with your own eyes — you don’t need binoculars or a telescope.

But that doesn’t mean they’re all easy to find. If you don’t do a lot of skywatching, it can be confusing to pick the planets out of a sky filled with stars. Here are some tips to make it easier:

First, figure out when sunrise is for your area. The U.S. Naval Observatory has an easy tool.

Also, to help you get your bearings and to make it easier to find the planets, download an astronomy app and get used to using it inside the house before you head out into the cold.

You can also use the charts in many of the popular astronomy websites:

Or you can contact your local planetarium to see if a special show is planned.

Bundle up! You’ll probably need to be outside 15 to 20 minutes to find the planets and enjoy the sky.

Start with Venus! Besides our moon, it’s the brightest thing in the night sky and it’s the easiest planet to find. Look to the southeast just above the horizon.

Next, look for Jupiter. It’s second brightest but it’s far away from Venus in the southwestern sky. If you have good image-stabilizing binoculars, you may even see some of Jupiter’s moons.

Once you’re confident you’ve spotted Venus and Jupiter, the other planets get easier to pick out.

After you find Mars, you can hunt for Saturn. It’s between Mars and Venus.

Now for the troublemaker — Mercury. Because it’s closest to our sun, it often gets lost in the glare of sunrise or sunset.

But you might be able to spot it by January 22 — if you don’t have a lot of buildings, trees or mountains blocking your view. Mercury will look like a small bright dot between Venus and the horizon.

If five planets aren’t enough for you, a comet is making its closest swing by Earth this week. Comet Catalina doesn’t pose any threat to us — it will safely pass about 67 million miles away, according to NASA. But that’s close enough to spot it with binoculars or a telescope in the pre-dawn sky.

Earthsky.org has some good tips for finding the comet. Looking at it through binoculars, the comet looks like a small, fuzzy smudge in the sky but it’s worth the trouble for comet lovers.

Interested in the comet? Don’t wait around. This is the first time Comet Catalina has been in our part of the solar system. But it’s going so fast that scientists expect it to zip by Earth, escape our solar system and never return.

McALLEN, Texas (Border Report) -- The South Texas border county of Hidalgo County is in a "dire situation" due to uncontrolled coronavirus cases, and will start issuing "criminal consequences" for those who are needlessly out and about, county leaders announced Thursday.

Hidalgo County had a record 1,274 new COVID-19 cases on Thursday and 10 coronavirus-related deaths, Eddie Olivarez, the county's chief administrative officer for Health and Human Services, announced during a FaceBook live event on Thursday afternoon. There are 741 COVID patients currently hospitalized, with 200 in the intensive care units.

RIO GRANDE RIVER, Texas - A U.S. Commissioner is demanding Mexico comply with their requirements levied in the 1944 Water Treaty that orders Mexico to deliver water from the Rio Grande to the United States.

U.S. Commissioner Jayne Harkins of the International Boundary and Water Commission requested the government of Mexico to take immediate action on this matter in order to meet their side of the treaty.

The superseding indictment includes a new hate crime and firearms charges stemming from the death of a shooting victim who had been hospitalized.

St. Louis County police officer is sixth employee of the department to test positive for COVID-19

Second stimulus check: Could payments be limited to those making $40,000 or less?

11-year-old girl, her father shot to death in dog dispute with neighbor in Florida, police say

Scammers pose as contact tracers to get consumers banking information

Second stimulus check: Could payments be limited to those making $40,000 or less?

St. Louis region’s rise in COVID-19 cases is a trend, not just a blip

Photos: The tragic history of the ‘Glee’ cast