ST. LOUIS – An antique store on Cherokee Street in south St. Louis had one of its windows shattered by a rock Tuesday morning. The owner believes she’s being targeted because she flew an American flag with a thin blue line on it outside her store in support of the police.

Cherri Elder, the owner of Elder’s Antiques, a longtime business on Cherokee Street’s Antique Row, said the verbal harassment began last summer when she first put the flag up.

Elder said she supports two city police officers who patrol the Antique Row on Cherokee where she is located.

She took the flag down in December as the harassment continued. On February 17, Elder said a large sign was put on her front door glass saying, “Pig Supporters Not Welcome Flag Goes Down Or You Go Down.”

A note was included with the rock that busted the store window. It reads, “You Were Warned” and includes the letters “MLM,” as well as a crudely drawn hammer and sickle symbol of the Communist Party.

Elder found another note at the back of the store which contained a similar message: “You’ve Been Warned.” The letters “MLM,” the symbol, and the phrase “Viva Sendero Luminoso” were also included on that second note. 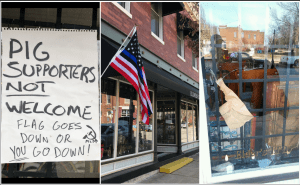 In this instance, the letters MLM are an abbreviation for Marxism-Leninism-Maoism. The Spanish phrase translates to “Long live the Shining Path,” a more commonly known name for the Communist Party of Peru.

These incidents come after another nearby store on Cherokee called DeMay Antiques and Furs had a front window kicked out and four American flags supporting police stolen.

The window incident there happened back on January 4. The owner of that store, Shirley DeMay, thinks she and Elder’s Antiques were both targeted because of their flags supporting police.

No arrests have been made in either case.

Elder said her business has actually increased by people supporting her in the wake of the incidents. She said she’ll keep the flag up in support of the police.

She and DeMay both hope the vandals are caught.