ST. LOUIS, MO (KTVI)-Thousands of St. Louis area Girls Scouts may have to find new troops to join. The Archbishop of the Archdiocese of St. Louis has instructed  Catholic parishes to take a close look at Girl Scouts and determine if the organization is good for Catholic girls.

The Catholic Church and Girl Scouts in St. Louis have had a partnership for almost century. While the church has remained steadfast in its beliefs it feels the Girls Scouts have changed and religious leaders don’t like those changes.

Archbishop Robert Carlson said the organization’s program has elements that conflict with Catholic teachings. He wants parishes across the archdiocese to take a close look and decide if the organization provides good ideas and role models for Catholic girls.

Brian Miller, director of the Catholic Youth Apostolate in the Archdiocese, says, “There’s issues in the curriculum of links and partnerships the girls scouts have with organization that advocate for abortion rights or contraceptive rights for minor and things like that.”

Meanwhile, the head of Girl Scouts said she was disappointed by the archbishop’s comments but the Girl Scouts don’t plan to make any changes.

Bonnie Barczykowski, CEO of Girl Scout of Eastern Missouri, says, “We continue to do what we do every day so we’ll continue to build girls of courage, confidence and character who make our world a better place so we won’t change anything.”

As for the Boy Scouts, the archdiocese is keeping an eye on that organization and is concerned but not asking Catholics to examine it closely yet.

The Archdiocese of St. Louis released a statement on Archbishop Carlson’s letter saying:

On Thursday, February 18, Archbishop Carlson released a letter regarding the Archdiocese of St. Louis’ relationship with the Girl Scouts. The letter asks parishes to evaluate the effectiveness of Girl Scout troops in promoting the Catholic faith and forming young women of virtue. Although this letter specifically addresses Girl Scouts, we continue to evaluate the mission effectiveness of all our youth outreach. So as to be inclusive of other faith-based groups and organizations dedicated to the formation of young girls, the letter announces the creation of a Catholic Committee for Girls’ Formation replacing the Catholic Committee for Girl Scouts. Archbishop Carlson has already selected co-chairs for this new committee and its work has recently begun.

Although we are a secular organization, we greatly value our long-standing partnerships with religious organizations across many faiths. We provide the opportunities for girls to build leadership skills that when combined with their faith formation develop them into strong women, who will lead in their homes, communities, our country and our world.

Girl Scouts of Eastern Missouri serves over 43,000 girls with the support of over 15,000 adult volunteers in the City of St. Louis and 28 surrounding counties in eastern Missouri. It is because of this support that we have remained one of the largest and strongest Girl Scout Councils in the nation.

I am grateful for what you do each and every day as parents and leaders of these young women. I am here to support you and your girls. We are honored that you choose Girl Scouts of Eastern Missouri. 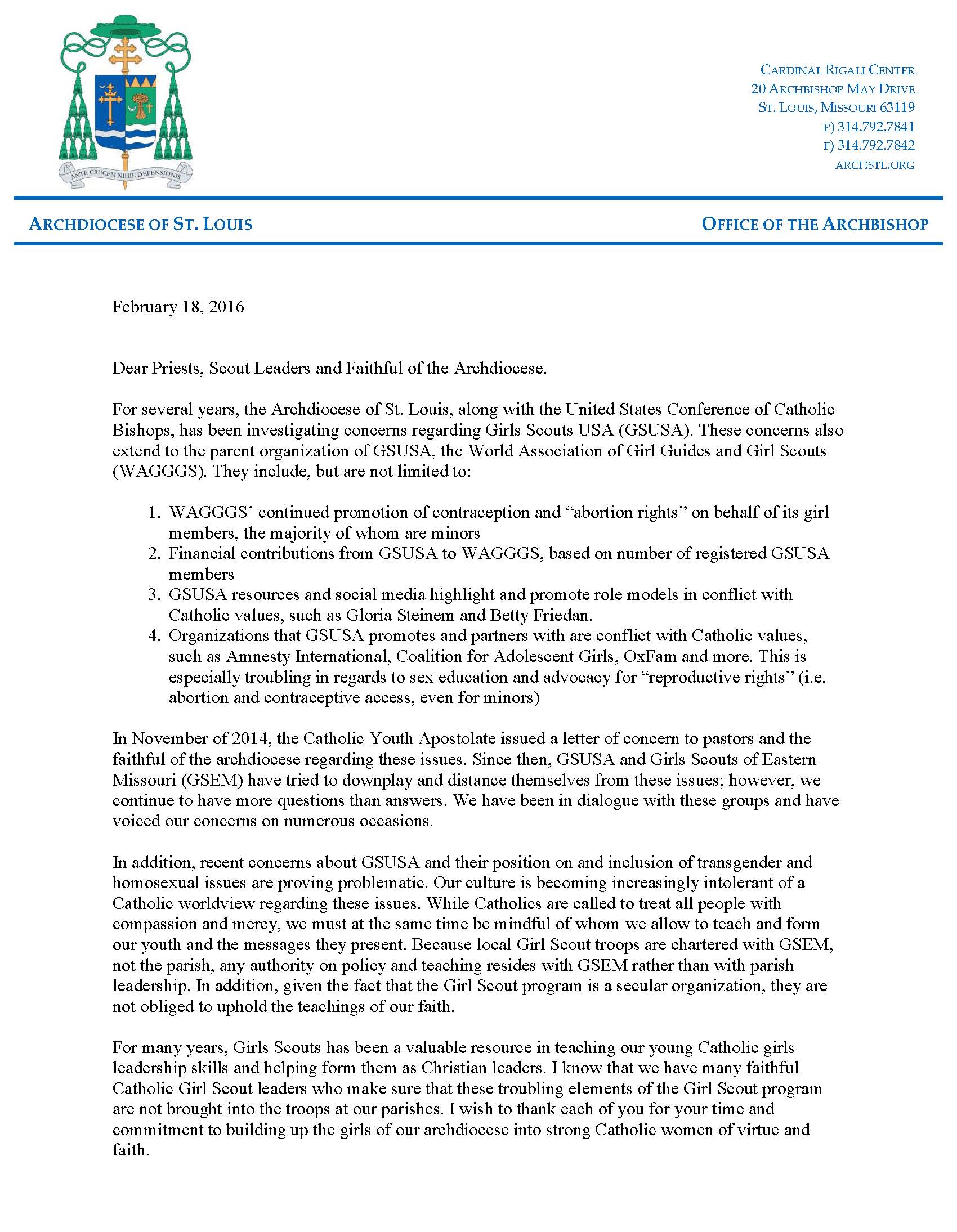 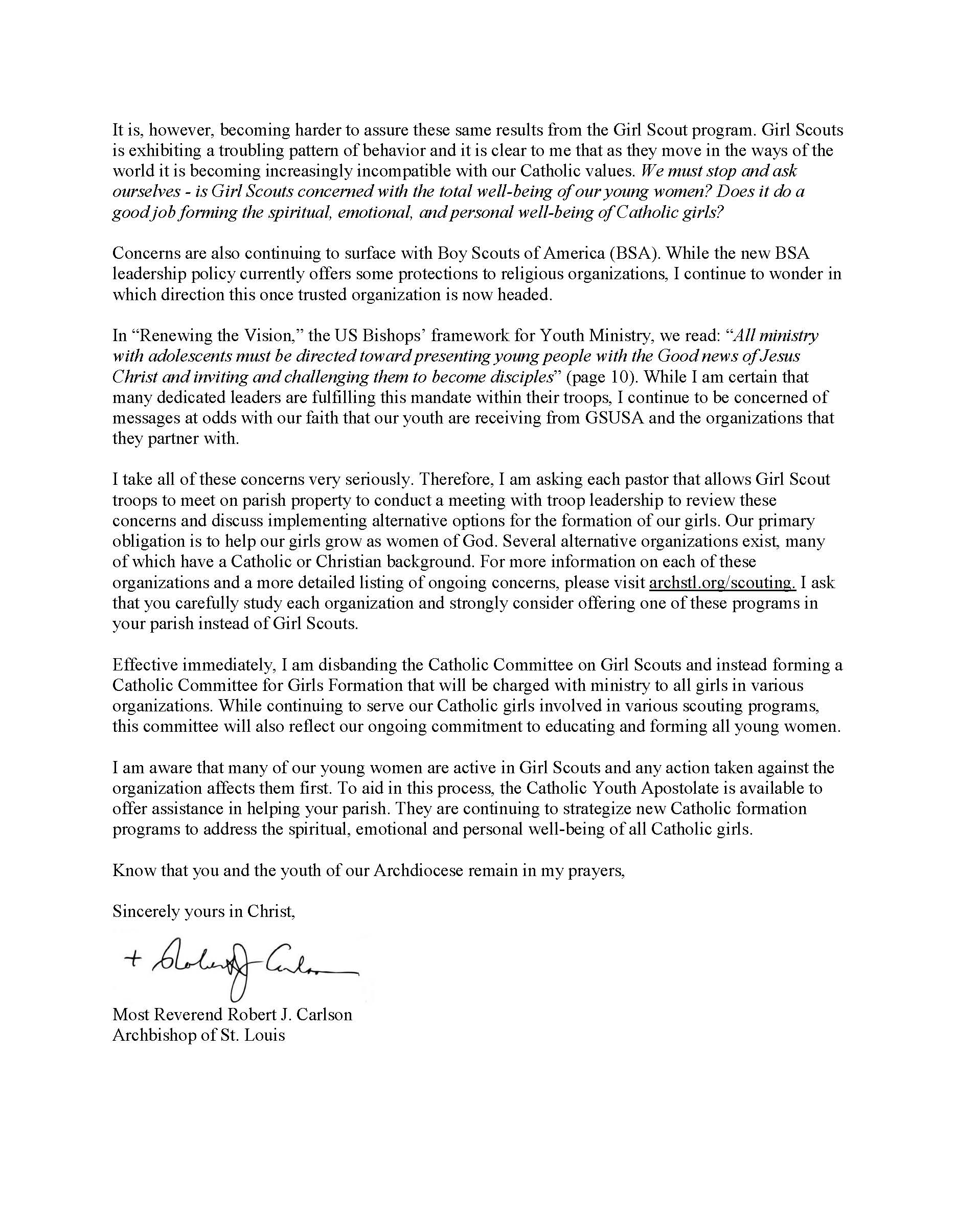 Blair’s Social Second: What are your favorite memories …

Woman stabbed by man trying to steal her purse