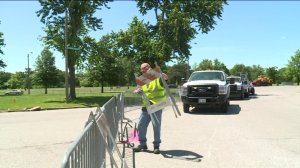 ST. LOUIS (KTVI) – There were protests at the monument Tuesday night in Forest Park. Wednesday, with no warning, workers set up a barricade around the Confederate monument to create a 50 foot perimeter. Workers then used a bucket truck to take down the Confederate drive street sign.

Koran Addo tells FOX 2 that this is the first step in removing the monument. Engineers will need to figure out the best way to take the monument down. This could take weeks to complete.

The city says it will cost between $100,000 – $130,000 to disassemble. It will be put into storage out of public view. The city says it’s also open to public input on what to do with the monument.

The Confederate monument was placed in the park in 1914 by the Daughters of the Confederacy. About two year ago, then-mayor Francis Slay created a committee to discuss how to remove the monument.

Last month, Mayor Lyda Krewson was briefed on the options of what to do with the monument.
In a statement, she said, “I know this is an emotionally-charged issue for people on both sides. But this monument is hurtful to so many people and I believe it should come down.”

New barricades surround the Confederate monument in Forest Park. Mayor's Office says this is the first step in the takedown process.@FOX2now pic.twitter.com/PtrXCQWMcA

Private and public employers look for new hires at …

Blair’s Social Second: What is your favorite ride …

NHL, STL police looking into threats made toward …