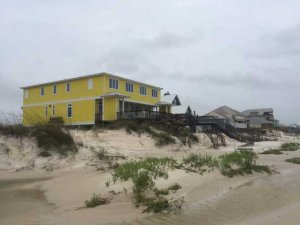 FORT MORGAN, AL – A 10-year-old child from St. Louis was killed after a large wave knocked a beach log in front of the condo his family was vacationing in. The Baldwin County Sheriff’s Office reports that the log toppled onto the boy, killing him. They arrived on the scene located in the 3100 block of Ponce De Leon Court for a possible drowning at around 10:30am Wednesday.

The child walked outside the condo earlier this morning during a walk with his family. His father tells investigators that the 10-year-old was only standing a few feet from the front door.  He was between the large log and the door when the wave washed in.  The wave crashed into the beach log that rolled to the home and crushed the child. The boy had severe head injuries from the accident. WKRG-TV reports that the boy’s skull was crushed by the log.

His father was also outside, attending to other children. He noticed the large wave approaching the area where his son was standing. He tried to help after the wave came crashing in. 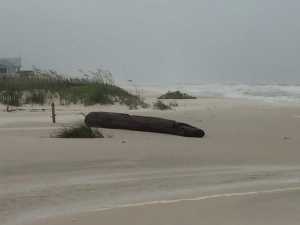 The boy was taken inside the condo. The father and a witness attempted to resuscitate him and called for medical assistance. Fire and EMS crews arrived and attempted resuscitation, but their efforts were unsuccessful. The young man was pronounced dead at the scene.

The child was taken to the Department of Forensic Science in Mobile where an autopsy will be performed.  He has not yet been identified.

Tropical Storm Cindy is churning slowly toward the Gulf Coast, where millions of residents are bracing for heavy rain and potential flash flooding.

Between Wednesday and Thursday morning, the storm could bring up to 12 inches of rain to some coastal areas of Texas and Louisiana.

As of 10 a.m. ET, Cindy was about 170 miles south-southwest of Morgan City, Louisiana, and about 180 miles southeast of Galveston, Texas, with maximum sustained winds of 50 mph, according to the National Hurricane Center’s latest advisory. It was moving northwest at 10 mph.

Cindy is just the second tropical storm to form in the Atlantic since the hurricane season officially began on June 1, and the third storm of the year. The hurricane season got an early start this year when Tropical Storm Arlene formed in April.

The center of the storm is projected to make landfall sometime Thursday morning.

Heavy rain and some flash flooding have been reported already along the Gulf Coast since Tuesday, but more is on the way.

From East Texas to southern Mississippi, Cindy is expected to drop 3-6 inches of rain and some isolated areas could see up to 12 inches of rain, the National Weather Service said.

The storm will make landfall along the coast between Texas and Louisiana by Thursday morning.

The most torrential rain would likely be to the east of the center of the storm, because these areas will see a prolonged period of onshore flow, Guy said.

As the storm comes ashore, the coast could also face strong winds of up to 50 mph.

‘Prepare for the worst’

For state officials in Alabama, Louisiana, Mississippi and Texas, their greatest concern is flooding.

Ahead of the storm, Louisiana Gov. John Bel Edwards declared a state of emergency in the state.

“All arms of the state’s emergency preparedness and response apparatus are taking Tropical Storm Cindy seriously, and we are calling on all Louisianans throughout the state to do so as well,” Edwards said in a statement.

“Please do all you can to prepare for the worst while praying for the best.”

New Orleans Mayor Mitch Landrieu on Wednesday urged residents to remain alert even though the National Weather Service had lifted the tropical storm warning in the city.

“We are not in the clear yet,” he told reporters, adding that the city was under a tornado watch until 7 p.m.

Up to four inches of rain fell in New Orleans on Tuesday and an additional three to six inches were expected over the next 48 hours, followed by weekend thunderstorms, Landrieu said.

Authorities in Louisiana announced they will close courts and other government buildings across the state on Wednesday.

Some summer school programs were also canceled Wednesday in New Orleans and Donaldsonville.

Alabama Gov. Key Ivey also declared a state of emergency to “guarantee state resources are on standby and are ready to assist impacted communities if necessary.”

“There’s been a lot of rain in the area over the last 3-4 weeks so the ground is pretty saturated,” said Glen Brannan, the plans and operations officer with Alabama’s Mobile County emergency management agency.

In Mississippi, the city of Biloxi declared a state of emergency because of risk of flooding. Residents in nearby counties were also offered sandbags.

“It’s kind of like a slow-motion disaster for us now. It’s not wind, it’s rain we’re concerned about,” said Greg Flynn with the Mississippi Emergency Management Service.

In Texas, elderly residents and families with medical issues living in Bolivar Peninsula near Galveston were encouraged to evacuate their homes.

“The voluntary evacuation order is intended to alert residents of Bolivar Peninsula that emergency responders may be unable to reach them,” Galveston County Judge Mark Henry said in a statement.

Texas Gov. Greg Abbott said several emergency operations teams have been activated or are on standby to prepare for the storm’s landfall.

“We stand ready to assist local communities in the event of an emergency, and I ask all Texans to keep those in the storm’s path, and our brave first responders, in their prayers as they prepare for this storm,” Abbott said in a statement.

NHL great Wayne Gretzky moves back to St. Louis to …

Goodwill gearing up for recycling and donation drives