Skip to content
Breaking News
Breaking News
Map of St. Louis area COVID-19 cases – MO: 1,026 deaths/ 22,830 cases IL: 6,987 deaths/ 144,882 cases.
Live Now
Live Now
St. Louis Metropolitan Pandemic Task Force briefing
This is an archived article and the information in the article may be outdated. Please look at the time stamp on the story to see when it was last updated.

ST. LOUIS (AP) – The police chief in St. Louis County is limiting his officers’ social media use after a precinct’s Facebook page linked the dangers of toy guns to the fatal police shooting of a 12-year-old Ohio boy.

Fenton is about 30 miles south of Ferguson, where a police officer fatally shot 18-year-old Michael Brown in August. St. Louis County police investigated that shooting and helped during ensuing protests.

The Fenton precinct’s Facebook post referred to a Cleveland police officer who fatally shot 12-year-old Tamir Rice last month while responding to a report about a youth playing with a gun in a park. The weapon was a pellet gun. 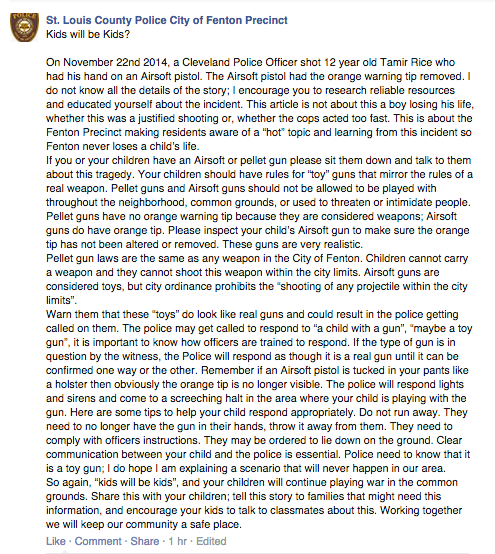 ST. LOUIS - Under the new mask mandate in St. Louis, Dr. Alex Garza of the St. Louis Metropolitan Pandemic Task Force is holding a press conference on the state of COVID-19 in the city.

ST. LOUIS - The Loop Trolley will be back in service beginning on the Fourth of July.

LITTLE ROCK, Ark. (KNWA/KFTA) – Governor Asa Hutchinson announced on Friday that the state of Arkansas will allow cities to adopt ordinances requiring residents to wear masks while in public spaces.

Gov. Hutchinson said he asked the Arkansas Municipal League to adopt a model ordinance that would allow cities the opportunity to implement such an ordinance.

CAUGHT ON CAMERA: Father and son respond to driver having medical emergency behind the wheel

Understanding the mask mandate before it goes into effect Friday