Skip to content
Breaking News
Breaking News
IL: 5,083 deaths/ 114,306 cases; MO: 707 deaths/ 12,673 cases. List of St. Louis area coronavirus disruptions
Watch Now
Watch Now
Illinois Town Hall: US Senators, local mayors answer your coronavirus questions
This is an archived article and the information in the article may be outdated. Please look at the time stamp on the story to see when it was last updated. 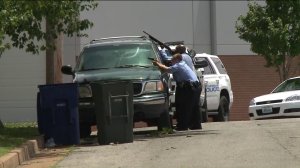 All of the victims range in age from 14-40 according to Sgt Brian McGlynn.

According to McGlynn, officers responded to the 1900 block of North 14th Street just after noon on Sunday for reports of two people being shot.  When officers arrived, they found two women suffering from gunshot wounds.  Those women were transported to the hospital where they are still being treated.

McGlynn says while officers were there, officers heard another shooting at the residence directly next door.  Officers were not able to make contact with anyone inside, so hostage negotiators were brought in.  After the house was cleared, police searched the residence and found three people with gunshot wounds.  One man who was pronounced dead at the scene, one female was also pronounced dead at the scene and a third woman was taken to the hospital where she is being treated.

"The investigation is just beginning" McGlynn said.  "We don't have any idea of who shot who yet, it appears to be that they have some kind of relationship whether it be family, domestic type of relationships we don't even know the extent of those relationships are in fact we haven't identified the people yet" he said.

McGlynn also says police believe all of the victims know each other, but the extent of their relationship is still under investigation.

"All of these shootings are horrible" McGlynn said.  "This one is going to be- I'm sure once we find out who these people are and what the relationship is- it's going to be very tragic because we can only it looks like everybody is in one way connected. Whether it be family or loved ones we don't know" he said. ​

Prosecutors looking at the death of George Floyd on Thursday asked the people of Minneapolis for patience while they investigate the case that has riled the city and the nation.

Floyd, a 46-year-old black man, died after pleading for help as a police officer used his knee on Floyd's neck to pin him -- unarmed and handcuffed -- to the ground. His death sparked outrage and protests across the country, demonstrations that continued Thursday.

HOMER GLEN, Ill. (WGN) — While scientists are in overdrive to develop better hospital protocols amid the coronavirus pandemic, a little boy came up with a design of his own, in honor of his sister who spends a great deal of time in the hospital.

The incident began about 10 p.m. in the 3600 block of West Avenue when officers responded to a family disturbance call, the Fullerton Police Department stated in a news release.

Nationwide to lay off 250 employees, furlough 350 others

New guidance for churches and houses of worship in Illinois

Minneapolis braces for more violence over death in custody

Nationwide to lay off 250 employees, furlough 350 others