ST. LOUIS, MO — The Lieutenant Governor of Missouri is suggesting steps to remove State Senator Maria Chappelle-Nadal from office. Thursday she posted, and then later deleted, a Facebook comment saying she hoped President Trump would be assassinated. This had many elected officials calling for her resignation. The Secret Service is now investigating her.

“Many Republicans and Democrats have asked for her resignation. For her to continue to serve as a Missouri State Senator is totally unacceptable. There are ways to remove her from office but I think she should take responsibility for her actions and resign,” said Missouri Lieutenant Governor Mike Parson. “As the President of the Missouri Senate I have the ability, the right to call on my fellow Senators to expel her from the Missouri Senate; which I plan to do if she does not resign.”

Governor Eric Greitens told his Facebook fans that he believes Chappelle-Nadal  should step down.

Chappelle-Nadal says she will not step down from office. Saying Thursday that she isn’t going anywhere.

“No. Absolutely not. I told people if there are legislators cheating on their wives and smoking marijuana in their offices and they’re not being asked to resign, but I am for a mistake I made and owned up to,” she said. 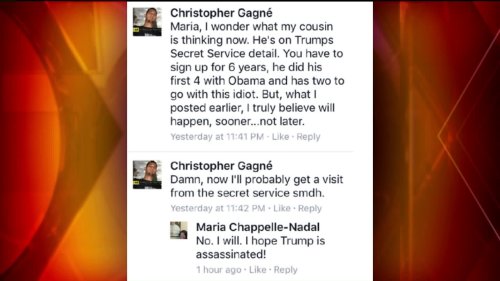 The state senator’s comments came around midnight in an exchange with a person named Christopher Gagne. The post was deleted by the morning, but the screengrab had been saved and shared.

In a statement to our news partners at the St. Louis Post-Dispatch, Chapelle-Nadal said, “I didn’t mean what I put up. Absolutely not. I was very frustrated…Things have got to change.”

She later wrote, “I put that up on my personal Facebook and I should not have.”

Lieutenant Governor Mike Parson joined the chorus calling for Chappelle-Nadal’s resignation Thursday. He released this statement on the topic:

“It is a total disgrace for the Senator to call for the assassination of the President or any elected official. I believe she should immediately resign from her position, as this is conduct not befitting of a State Senator or a Missourian,” said Lieutenant Governor Mike Parson.

“I will not sit idly by and let this kind of behavior transpire in our state, especially from members of our government. As a veteran of the armed forces, I was personally offended that a person elected to represent Missourians would call for the assassination of our Commander-in-Chief,” Lieutenant Governor Parson said.

ST. LOUIS - A 39-year-old woman had her car stolen from her at gunpoint Saturday morning in St. Louis.

The woman told police that two men approached her while walking to her car outside a Mobile gas station convenience store off Grand Boulevard around 2 a.m.

The incident happened at 3919 Washington Boulevard around 8 p.m. Two suspects entered the business at closing time with firearms, according to police. The suspects took money and fled the business.

Corn sweats? Yep, and impacts our summer weather doing it

Lightning can strike 11 to 25 miles from a storm

Why 2021’s ‘Severe Weather Season’ switched from spring to summer

Boeing to build first of its kind aircraft in Metro East, project to boost economy

‘Brian is not missing, he’s hiding’: Search continues for fiancé of Gabby Petito