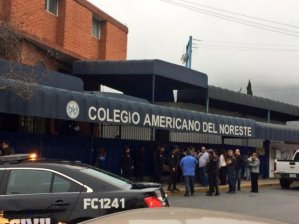 A teenage student in northeastern Mexico shot and wounded a teacher and three classmates at a private school before turning the gun on himself, authorities said.

The unidentified student opened fire Wednesday morning at the bilingual Colegio Americano del Noreste, according to Aldo Fasci, a security spokesman for the state of Nuevo León. Conditions of the wounded were unknown.

The school accepts students from preschool to the secondary level, according to its website.

The teacher is 27 years old; the shooter and the three classmates who were wounded are 14 and 15 years of age, according to Fasci.

The shootings were reportedly captured on a school surveillance camera, he said.

Monterrey is about 140 miles south of Laredo, Texas.

WASHINGTON (NEXSTAR) – Lawmakers on both sides of the aisle Friday were attempting to revive an effort to increase the minimum wage.

One day earlier, the Senate parliamentarian's office shot down the $15 minimum wage proposal as a part of the larger $1.9 trillion COVID relief package that is headed to a House vote Friday night.

ST. LOUIS - Long drives to vaccination sites may keep people from getting the vaccine and could widen the already-significant health disparities between those who have transportation and those who don't.

The Urban League of St. Louis has brought the vaccines to residents of senior apartment complexes.

ST. LOUIS--A Warrenton man will spend 30 years in prison after pleading guilty to charges stemming from a July 2019 incident where he was accused of attempting to kill federal law enforcement.

Elijah Moore pleaded guilty Friday in a tense federal court hearing to two counts of attempting to kill a federal officer, one count of discharging a firearm in furtherance of a crime of violence and one count of carjacking.

Third stimulus checks: Here’s who would get $1,400 under the House relief plan