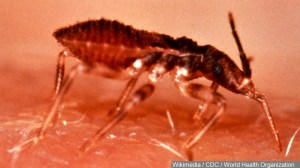 ST. LOUIS, MO (KTVI) – It’s called the “kissing bug” and it’s bite can be the kiss of death if left untreated.

The CDC is warning Americans about a deadly Latin American disease is making its way through the southern part of the United States, including Missouri and Illinois. It’s called the “Kissing Bug” but it’s not as cute as it sounds. The bug carries a parasite that causes Chagas disease.

The disease once thought to be limited to Mexico, Central and South America is now infecting about 300,000 people in the lower half of the US. It is important to note, most of the people living with the disease were infected while in Central or South America.

Doctors say the kissing bug is a silent killer and if not treated, the infection can prove fatal. Symptoms include pain in the gut or swelling where the bug bit the person. Experts say a person can go as long as 20 years before the parasite takes it toll.

If you find a kissing bug, don’t try to touch or squash it. Instead seal it in a container and take it to the health department.

ALTON, Ill. – We’re going underground in Alton, Illinois, into a tunnel that was just found.

“A lot of brick,” said Gary Machens, who discovered the tunnel. “Whatever they built this for, it took a lot of men and a lot of hours. You know, one guy didn’t do this.”

"We have to look at it and deal with it because it takes a minute before somebody actually comes and cleans it up," said Denise Holmes.

FRANKLIN COUNTY, Mo. – When it comes to the mail, looks can be deceiving. Just ask Franklin County resident Nicole Birkmann.

“This has my name on it. It has my address. It says the word ‘farm.’ I don’t own a farm. I don’t have a small business,” Birkmann said.

Missouri House advances bill for guns on buses, in churches