Skip to content
Breaking News
Breaking News
Map of St. Louis area COVID-19 cases – MO: 1,028 deaths/ 23,856 cases IL: 7,020 deaths/ 147,251 cases.
Live Now
Live Now
Gov. Mike Parson gives update on coronavirus in Missouri
This is an archived article and the information in the article may be outdated. Please look at the time stamp on the story to see when it was last updated.

Yet again, the Nordic countries have dominated a list of the world’s most desirable places to live.

But before the rest of us get too jealous, the experts warn that the Nordics shouldn’t sit back and relax just yet. 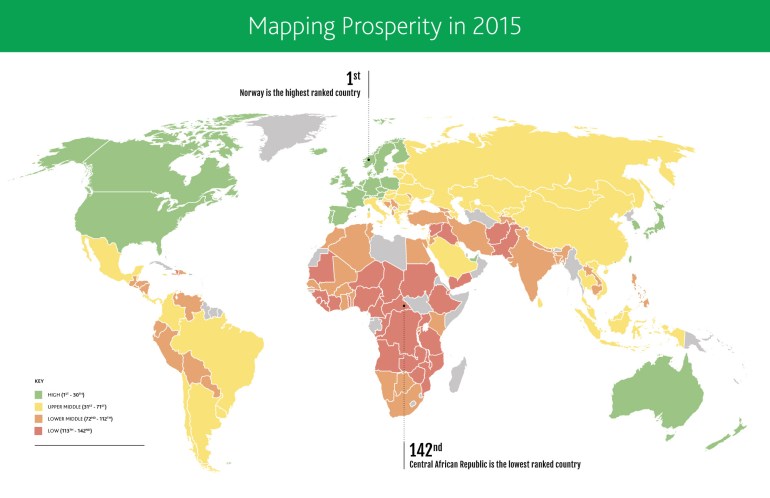 Scandinavia is doing great but not that great

For the seventh consecutive year, Norway topped the list as the most prosperous country in the world.

Finland and Iceland ranked ninth and 12th on the list.

On the flip side, the research company says that the Nordics still have some catching up to do.

Economy-wise, they haven’t been doing as well as many other advanced countries.

Among the top 20 most prosperous countries, Finland and Iceland are the only countries whose economy sub-index ranks outside the top 30.

Norway, Sweden and Finland have all seen their economy ranking slip in recent years.

China is rich, not prosperous

The strongest economy is Singapore, which ranked 17th in the overall Prosperity Index.

The city-state performed well overall. It appeared in the top 15 for all except two sub-indexes: personal freedom and social capital.

It came a poor 100th place on safety and security and 120th on personal freedom.

“The way we’ve traditionally measured how successful countries are is too narrow.”

“Of course wealth is important but it doesn’t tell the whole story.”

In the past seven years it has moved up 21 places to 69th position — the fastest mover on the list. 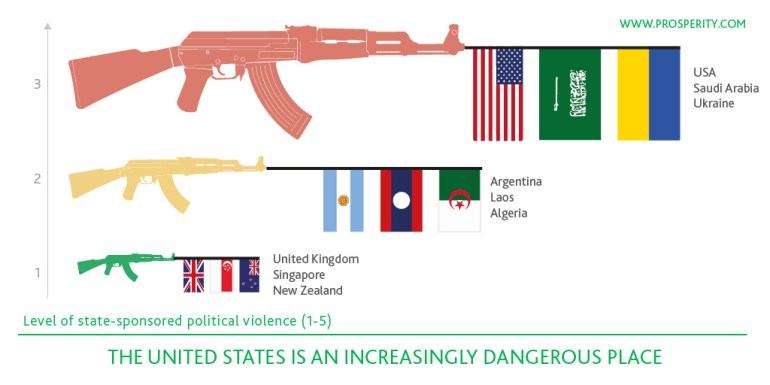 The world’s getting more dangerous

Another key finding of the annual index is that the world has become a more dangerous place since the survey was first carried out in 2009.

Africa and the Middle East have witnessed major decline in the safety and security sub-index.

The Democratic Republic of the Congo, Afghanistan and Syria were named the most dangerous places in the world. Their overall prosperity rankings are 137th, 141st and 136th respectively.

The United States (no.11 in the overall ranking) is the most unsafe country among the chart’s top countries, taking the 33rd spot.

The report says the United States is the only western country to register “high levels of state-sponsored political violence” — a level of 3 (on a 1 to 5 scale), equivalent to countries such as Venezuela, the Dominican Republic and El Salvador.

The index also quotes Amnesty International’s report that the United States has the same level of political violence as Saudi Arabia.

Hong Kong was hailed as the safest place in the world for the third year in a row.

137. Democratic Republic of the Congo

Top and bottom countries by the 8 sub-indexes

ST. LOUIS - Missouri Gov. Mike Parson is expected to speak on coronavirus this afternoon. The state is reporting 23,856 cases and 1,028 deaths.

ST. LOUIS - St. Louis Mayor Lyda Krewson will hold a briefing Monday afternoon to discuss the gun violence over the weekend, update the public on the city's plans for returning to school later this summer, and give the latest on the city's fight against COVID-19. You can watch the briefing live in the video player above or on-demand later.

The mayor led off Monday's briefing with the latest numbers on coronavirus.

CLAYTON, Mo. - The St. Louis County Police Department says a commissioned police officer is the department's fifth employee to test positive for coronavirus. It is unknown how the individual contracted COVID-19.

No more delays — July 15 is Tax Day. What to know about the deadline

Coronavirus can float in the air, and the WHO should clearly tell people that, says group of experts

Here is your risk of getting the coronavirus during various activities