Skip to content
Breaking News
Breaking News
IL: 5,330 deaths/ 118,917 cases; MO: 771 deaths/ 12,962 cases. List of St. Louis area coronavirus disruptions
This is an archived article and the information in the article may be outdated. Please look at the time stamp on the story to see when it was last updated. 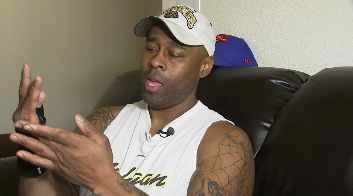 Sean Williams took a chance when he went into Walmart Monday afternoon. He left his backpack in his truck despite his better judgment.

“I knew I shouldn’t have. The windows were down. It was 1 p.m. People were walking up and down. I just thought, ‘OK, I left my backpack in my truck before,'” Williams said.

This time when he came out, his backpack was gone. A prosthetic hand given to him by Veterans Affairs was inside the backpack.

“I know theft happens every day, but it’s just kind of hard when it happens to you,” Williams said.

“It was one of the best times of my life. Good friends, good times,” Williams said.

One month after Williams got out of the service, he was in a car accident that severed his right hand.

“It was torn partially down here and crushed,” Williams said.

Even though the injury didn’t happen in the line of duty, the VA provided Williams two custom-made prosthetic hands worth thousands of dollars.

Williams may not need the prosthetic to perform daily tasks like cooking, but he says its gives him a feeling of normalcy.

“It kind of makes me feel like a regular man,” Williams said.

Williams wants the person who stole his hand to please give it back.

“I forgive you for stealing my stuff, but just give me back my prosthetic. I mean, it’s my hand,” Williams said.

Anyone with any information regarding this case is asked to contact the Mesa Police Department at 480-644-2211, option 2.

According to the Columbus Division of Police Facebook page, police were wanting to identify a man seen in a YouTube video.

COLUMBUS, Ohio (WJW) — Columbus police are searching for a person who was possibly involved in provoking violence during Saturday's protests.

Protesters gathered outside the Ohio Statehouse and through downtown Columbus Saturday, demonstrating against police brutality after the death of 46-year-old George Floyd, who died in Minneapolis police custody on Monday.

COLUMBUS, Ohio (WJW) — Columbus police are searching for a person who was possibly involved in provoking violence during Saturday's protests.

Editor's Note: This is raw video. You may hear or see profanity/offensive language

Target set to close some stores amid George Floyd protests

‘We’re sick of it’: Anger over police killings shatters US