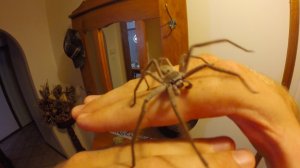 Not to alarm you, but a massive Huntsman spider has crawled out of your nightmares and into a rescue sanctuary in Australia.

Year-old photos of the Huntsman have recently resurfaced thanks to a post on the rescue farm’s Facebook page, and they are terrifying the internet.

The spider, aptly named Charlotte, was rescued in October 2015 by Barnyard Betty’s Rescue farm and sanctuary in Queensland, Australia, and according to the Facebook post, the photos of her crawling on a broom aren’t Photoshopped. “She is very real and very large and not photo shopped!!” the sanctuary wrote. The photos have been shared more than 90,000 times.

The post yielded mixed feelings, but the sanctuary has largely been praised for helping to dispel the stigma around spiders. “Thank you for not killing her. People hate these spiders, but they’re very peaceful and docile creatures. They just want to be left to do their thing,” Avenir Maxwell commented.

“All creatures deserve respect and kindness! So happy that Charlotte is able to live safely and peacefully at your sanctuary,” Danielle Helfrick wrote.

Others were not as excited. “Okay, so. 100% approve of and respect what you’re doing here, but please, for the love of God keep that thing and all of it’s family and friends OVER THERE and the heck away from me,” commented Mackenzie Lauren.

The farm says that there is no reason to be afraid. “She was a beautiful, calm spider, not aggressive in any way and like most spiders she just wanted to go about her business eating bugs and living in peace,” it posted.. “She didn’t or doesn’t need to be killed! Poor spiders are so misunderstood!”

The Australian Reptile Park said that although Huntsman bites can be painful for humans and cause nausea, symptoms are usually just some localized pain and swelling (phew).

While the spider easily covers half a broom head, it is unclear if she could be the largest Huntsman ever. While the average Huntsman spider is only about 1 inch long with a 5 inch leg span, the largest one ever recorded had a leg span of around 12 inches – roughly the size of a dinner plate. The farm did not take measurements of Charlotte, but many think she could be the new world record holder.

Barnyard Betty’s Rescue calls itself “a sanctuary for orphaned, mistreated and unwanted farm animals who if not rescued would be destined for a certain death.”

ST. CHARLES COUNTY, Mo. - Police are asking for the public's help to find a missing teen who may have run away from home. Dillion Weber, 16 was last seen in the 1500 block of Sherman Drive on the evening of Sunday, May 31. He may be wearing red tennis shoes.