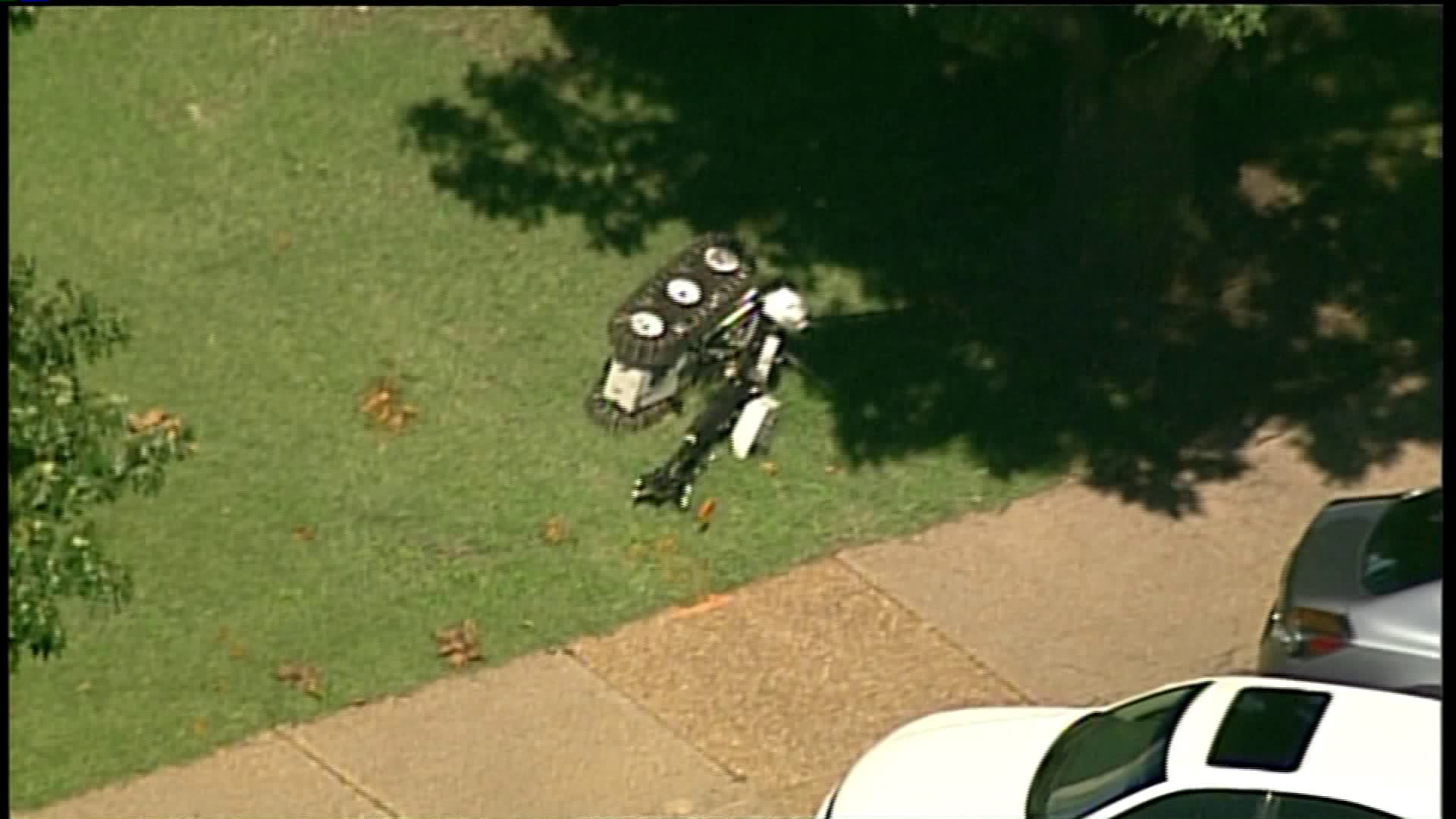 ST. LOUIS, MO (KTVI) – The Bomb and Arson unit was called to investigate several suspicious bags found St. Louis City Hall Monday morning. A bomb robot was deployed to check out the situation. A tweet sent by FOX 2 about the bomb robot is going viral. The robot fell over and the internet’s collective response is making people go, “LOL.”

At least one package was on a parking lot between City Hall and Scottrade Center. Three of those bags had clothing inside. Authorities believe the duffel bags may have been left by a homeless person.

SkyFOX helicopter was over the area while the Bomb and Arson Unit investigated the situation. During one point in the search the robot tipped over near a small hill.

FOX 2 tweeted, “It appears the bomb robot has tipped over at a hill.”

So far there have been nearly 4,000 retweets and 5,000 favorites of the tweet. The responses are priceless. You can see them below.

City Hall was not evacuated during the investigation. It does not appear that the robot was damaged in the fall.   You could see it standing again a short time later.  Bomb & Arson investigators cleared the scene around 11:50 a.m. There were no signs of a threat.

He had a late night. pic.twitter.com/n5jY0gYkfx

@Clintonite33 Help, it's fallen and it can't get up!

^THATS NOT A BOMB BOT (BELOW) THAT IS A BOMB BOT pic.twitter.com/sD9HGLxR2r

ST. LOUIS - Wednesday was the first of many focus groups, conversations, and workshops set to be held in the Central West End.

Residents gathered to discuss why the West End and Visitation Park Development Plan is important and how they plan to keep the culture.

GRANITE CITY, Ill. - After a difficult start to the school year on Granite City School District's bus routes, all bus routes are resuming for all students Monday.

"This Monday, we get to add routes back and we're just really excited to be able to do that for our students," Stephanie Cann, superintendent of the granite city school district, said.

St. Louis Police search for suspect after baby found inside a stolen vehicle

ST. LOUIS - Police are searching for a man who drove off with a woman's vehicle with her fourth-month-old child inside Wednesday afternoon. The vehicle was found hours later and the baby was reunited with his mother.

The incident happened around 1:25 p.m. at a gas station near Wyoming Street and South Grand Avenue. When the woman finished filling up her tank, she then left her son inside the vehicle running, while she went into the gas station's convenience store.

Developers of new Homer G. Phillips Hospital have ‘no intentions’ of changing name

Illinois bill would remove ‘conscience’ as basis for refusing vaccine

Baby found with a vehicle stolen from South Grand in St. Louis

Man accused of exposing himself to St. Louis school children

Don’t toss that old phone in the trash; how to get rid of unwanted electronics

Baby found with a vehicle stolen from South Grand in St. Louis

High-speed chase on I-70 ends at Mid Rivers Mall

St. Louis Police search for suspect after baby found inside a stolen vehicle