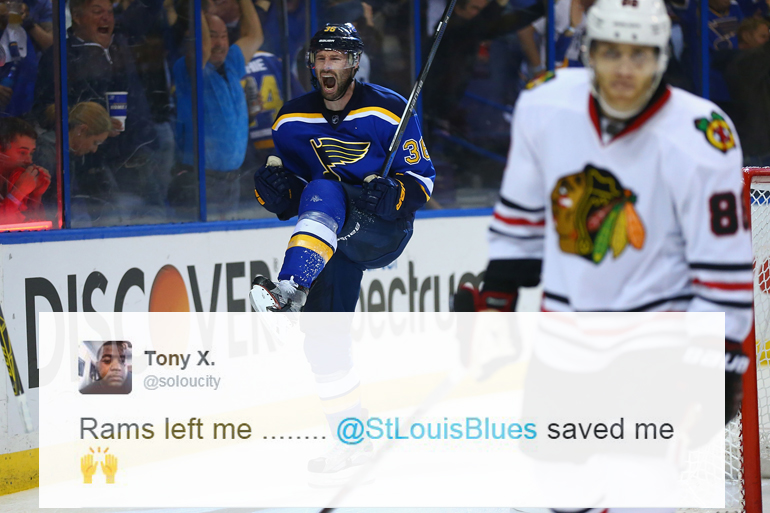 ST. LOUIS, MO (KTVI) – A lot of new fans are embracing hockey after the Rams left town. A Twitter user named “Tony X” discovered the sport the night the St. Louis Blues beat the Chicago Blackhawks. Fans erupted at the Scottrade Center after St. Louis won 3-2 in the last game of the series. His posts to social media about the match are going viral.  The Blues even offered him playoff tickets after reading his Twitter timeline.

I don't know who this dude kane is but we gotta stop him.

"We" being used very loosely.

Tony was looking for the Cardinals game on TV when he tried flipping channels to FOX Sports Midwest.

That is when he discovered the joy that is the NHL playoffs. It is one of the most exciting postseasons in all of sports. It looks like he found his new favorite sport.

The St. Louis Blues started reading Tony’s tweets. They offered him tickets to its first home game of the next round. Tony accepted their offer but didn’t know what to wear to the game.

Welcome to Hockey Twitter & #stlblues fandom, @soIoucity! Want to check out Game 3 live? It's on us! #WeAllBleedBlue https://t.co/27o5fB69KE

We tried to post all of Tony’s tweets to this story. You’ll need to check his Twitter feed for the entire torrent of Blues tweets. Many of them are NSFW.