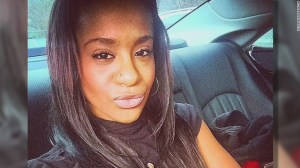 When Shaila asked how Bobbi Kristina was doing, Houston answered, “She’s the same. We’ve moved her now to a place for rehabilitation, you know, still not a great deal of hope. We’re praying. I don’t pray like that; I give it to God one time, ’cause I know he’s able. And I can not change a thing.”

She went on to say, “If he works a miracle, thank God; if it happens the other way, I’m all right.”

Bobbi Kristina was found unresponsive in a bathtub on January 31 at her home in Roswell, Georgia. She remained hospitalized and was recently moved to a rehab facility, after doctors placed her in a medically-induced coma.

Police have said they are treating her case as a criminal investigation.

You Paid For It: Sam Page administration wants to hire lobbyists

‘Space hurricane’ spotted above Earth for first time ever