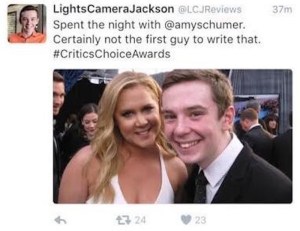 LOS ANGELES, CA – A 17-year-old got his picture taken with comedian Amy Schumer at the Critics’ Choice Awards on Sunday. He posted the photo to twitter with this caption:

“Spent the night with Amy Schumer. Certainly not the first guy to do that.”

Murphey apologized, which is a lot more than some adults would do.

@LCJReviews that's really okay honey. I just remember thinking you and your dad were sweet and it was a bummer to read that

Jackson Murphy has been reviewing movies on his YouTube channel under the moniker Lights Camera Jackson for the last 10 years.  He was at the awards show to meet celebrities and review movies.

Schumer was at the show to accept her MVP award.  You can watch her speech here.

Talking with your children about protests over George Floyd, police violence

VIDEO: Man injured after being shoved by police during protest in Buffalo