WICHITA, Kan. — Officials at a Kansas high school are under fire after a special needs student was asked to stop wearing his letterman jacket.

Michael Kelley has Down syndrome and autism. He’s not a varsity athlete but participates in extra-curricular special needs basketball, KSN reports. 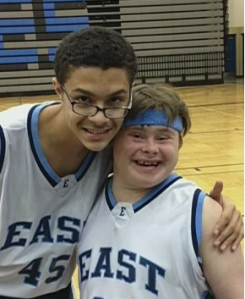 Michael’s mom, Jolinda, bought him the letter jacket after he was recognized for playing basketball. Michael wore it to school where he was asked to take it off, Jolinda said.

“Another parent, from what I am told, was upset that my son was wearing his letter jacket,” she told KSN. Jolinda said Michael removed the jacket and was given a sweatshirt to wear instead.

Wichita East High School administrators said policy is that only members of varsity teams are allowed to wear varsity letter jackets. “We have considered (allowing special needs students to wear varsity letters) and our decision was no,” Principal Ken Thiessen said. “That is not appropriate . . . because it is not a varsity-level competition.”

“We have considered (allowing special needs students to wear varsity letters) and our decision was no,” Principal Ken Thiessen said. “That is not appropriate . . . because it is not a varsity-level competition.”

“It’s important for the district to recognize all of the students who participate in school activities as representatives of their school. Students have pride in being a part of the school community. We put priority on creating those opportunities to celebrate,” the school said in a statement.

Michael’s family is trying to get the school to change its policy and has attracted attention on social media. More than 40,000 people have signed a Change.org petition asking the district to change their policy.

The school board is expected to address the controversy at a meeting on Monday night.