RICHMOND, Va. -- Scott Bergman and a group of his friends were discussing all the shark attacks taking place along the Outer Banks. So they thought to themselves, what would a smart business person come up with for personal protection?

"Here's the thing, it'll keep me safer from sharks than it'll keep you safe from sharks being outside of it. That's the way we look at it," a laughing Bergman told WTVR. 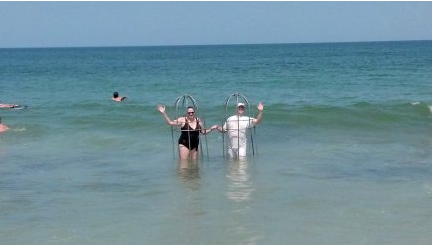 Scott Bergman is laughing because he has a lot of people fooled from the Outer Banks and on social media. Hundreds of thousands!  A picture of he and his wife walking into the ocean holding cages over their heads went viral Tuesday morning and people can't be believe that it's real. That's because it isn't.

"We went down there to film our spoof video, but it was the other people filming us  and taking pictures of us that really caught the attention and really took off," Begrman said sitting next to his invention.

This past weekend Bergman and wife took what he calls the Block Jaw, P-S-C  One. The acronym for personal cage one made of PVC pipes and steel bolts to make a funny video on a way people could protect themselves from all the shark bites that have been reported on North Carolina's coast this summer.

Bergman demonstrated how he protects himself as he stands inside the cage by explaining ,"shark comes by, you just put your hand in we've heard some people express concern because we put our hands out waving."

Bergman will release the spoof video soon, but in the meantime he just hopes everyone will be safe out there in the ocean. Bergman said his invention could’ve provided some safety aid.

"The idea is that you would go in and put it down on the surface  of the ocean so that you had protection on the bottom."

Bergman wants to stress that he isn't making light of shark attacks, he just looking for a collective laugh. By the way, if he did actually sell a Block Jaw P-S-C One, he said it would go for $499.99.

41 million have lost jobs since virus hit, but layoffs slow

‘I’m under here!’ Boy trapped under Jeep in his bedroom after drunk driver plows into home

Coronavirus cases still growing, but area hospitalizations are down slightly

More thunderstorms around today, then dry and sunny Friday into the weekend

Friend believes ‘angel on Earth’ was a victim of his generosity

Coronavirus cases still growing, but area hospitalizations are down slightly

More thunderstorms around today, then dry and sunny Friday into the weekend

41 million have lost jobs since virus hit, but layoffs slow