SLEEP TRAIN ARENA- Garth Brooks is in the middle of quite the stay in Sacramento, playing 6 concerts over 5 days at Sleep Train Arena.

The multi-concert event has brought over 100,000 fans from all around California, all smiling their best smiles before entering and after exiting the home of the Sacramento Kings. 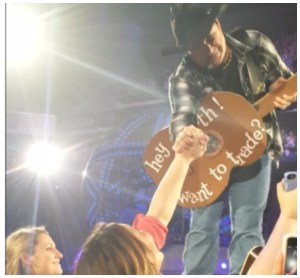 One fan, however, had a once in a lifetime experience. She showed up with a clever sign for Brooks to read, asking him to trade guitars. Another fan posted the video to YouTube.

Brooks notices the sign and in between songs he decides to ask the fan for it. Garth Brooks grabs the ‘guitar’, a cardboard sign shaped like a guitar that reads “Hey Garth, Want to Trade?”,  from the fan. He holds it up to the stage lights and observes it very closely before deciding to accept the trade.

At the end of the video you can see Brooks hand his guitar to the fan in the crowd, and then give her his capo from out of his pocket as well.

Luxury St. Louis living, what you can buy if you win tonight’s Mega Millions

‘Spy plane bill’ perfected by St. Louis Board of Aldermen

Two students injured when bus rear-ended another in High Ridge

NBC to shut down NBC Sports Network at end of 2021

Child tax credit: Biden stimulus plan could give parents $300 a month per child