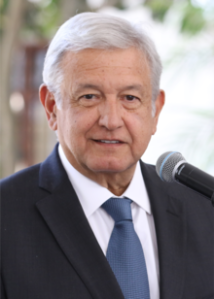 In a tweet about the leftist populist candidate, Trump says: “I look very much forward to working with him. There is much to be done that will benefit both the United States and Mexico!”

Thousands of people are pouring into Mexico City’s sprawling main square, known as the Zocalo, where the 64-year-old former mayor had called on his backers to rally Sunday night.

Retired Susana Zuniga beamed as she said the country was experiencing a moment similar to the Mexican Revolution a century ago.

In her words: “The people are fed up, that is what brought us to this.”

Motorists are cruising up and down the central Paseo de la Reforma honking horns to the tune of “Viva Mexico!” and waving Mexican flags from car windows and moonroofs.

Mexico’s Andres Manuel Lopez Obrador is on the cusp of winning the presidency after the second of his two main rivals conceded defeat ahead of official results.

He added “I recognize his triumph.”

An exit poll in Mexico is giving a big edge to leftist presidential candidate Andres Manuel Lopez Obrador in his third bid for the presidency.

The survey by Consulta Mitofsky says Lopez Obrador has a 16 to 26 percent lead over his nearest rival, conservative Ricardo Anaya.

Jose Antonio Meade of the ruling Institutional Revolution was said to be in third. He conceded defeat in a televised speech.

Lopez Obrador is a twice-spurned populist whose supporters hope he will deliver on promises to clean up corruption, reign in spiraling violence and lift millions out of poverty.

His detractors argue he would set the country back decades with an economic policy of state.

Amid widespread frustrations with the status quo, all of the candidates have tried to paint themselves as the agent of real change.

Lopez Obrador has enjoyed a wide lead in opinion polls since the beginning of the campaign.

Exit polls in Mexico are predicting clear victories for allies of leftist presidential candidate Andres Manuel Lopez Obrador in races for four statehouses plus the capital.

Surveys conducted by Consulta Mitofsky and Televisa forecast gubernatorial wins for allies of the Morena party in Chiapas, Morelos, Tabasco and Veracruz, and for head of government in Mexico City.

A win for the conservative National Action Party is predicted in the central highland state of Guanajuato.

In all, eight governorships plus the capital are up for grabs in Sunday’s vote. Exit polls for the presidential race have not yet been released.

Polls are beginning to close across much of Mexico or Sunday’s presidential election.

They’re scheduled to end at 6 p.m. in each of Mexico’s three summer time zones, meaning the last to close will come in the northwestern state of Baja California.

Ediane Da Costa Pereira is a Brazilian who became a naturalized citizen in Mexico and voted Sunday in Tijuana, across the border from San Diego.

She said she backed leftist front-runner Andres Manuel Lopez Obrador and called him less than ideal but the “best of the bad” options. She said a Lopez Obrador presidency is a good way to kick the ruling Institutional Revolutionary Party, or PRI, out of power.

But 20-year-old Jose Corrales said he supported PRI candidate Jose Antonio Meade for his “Advance With You” program, which would offer support to citizens according to their specific, individual needs.

Lopez Obrador has had a wide advantage in most polls over Meade, conservative candidate Ricardo Anaya of a right-left coalition and independent Jaime “El Bronco” Rodriguez.

Mexican President Enrique Pena Nieto has cast his vote in elections to choose his successor.

Pena Nieto tells reporters at the polling station that his administration will be “absolutely respectful and support the authorities that are elected.”

Candidate Jose Antonio Meade of Pena Nieto’s Institutional Revolutionary Party has been running third in most polls, behind front-runner Andres Manuel Lopez Obrador of the leftist Morena party and conservative Ricardo Anaya of a right-left coalition.

Pena Nieto said Sunday that the vote “should reaffirm us in our democratic vocation.”

The head of Mexico’s electoral institute says voting across the country has been proceeding “peacefully, without major incidents.” Lorenzo Cordova says only four of the 156,807 polling places failed to open.

Front-runner Andres Manuel Lopez Obrador voted early, saying `today the people will decide between more of the same or a real change.”

Candidates Ricardo Anaya and Jose Antonio Meade both said they were expecting to be celebrating when polls close later Sunday.

Polls have opened in Mexico’s presidential and local elections, and front-running candidate Andres Manuel Lopez Obrador is among the first to line up at his polling place in Mexico City.

While the left-leaning candidate holds a commanding lead in polls, voters who don’t like him also lined up early.

Twenty-six-year-old Juan Carlos Limas said he’s “concerned that some candidates are making proposals that are impossible, because they’re very expensive to carry out.” He says he’s voting for Ricardo Anaya, candidate of a right-left coalition.

ST. LOUIS, Mo-- The St. Louis Blues announced Wednesday that it will allow more fans inside Enterprise Center for games starting February 2. The team has already allowed a limited number of frontline workers, families and friends of players and team personnel for the first few games.

The number of fans allowed inside will rise to 1,400 for the team's games against the Arizona Coyotes and Colorado Avalanche the week of February 2-February 7.

ST. LOUIS - The Humane Society of Missouri is offering five tips to keep pets safe and warm during snowy weather and freezing temperatures.

The Humane Society's Animal Medical Center of Mid-America (AMCMA) has a "lifesaving motto" pet parents should follow: 35° and Below, Protect Fido!

ST. LOUIS, Mo. - Digital reporter Aprylete Russell is live on Art Hill to catch up with some of the kids and adults taking advantage of the wintry weather.