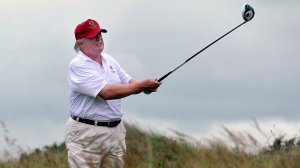 WEST PALM BEACH, Florida (CNN) — President Donald Trump, once a critic of his predecessor’s golfing, has visited one of his golf courses in Florida — seemingly to play the sport — five of the last seven weekends.

A president’s golf play is far from controversial: In fact, it’s the most common pastime of the country’s leaders. But before he ran for office, Trump was the most fervent critic of the fact that President Barack Obama regularly hit the links with friends, aides and advisers, arguing that it showed the president was unserious about fixing America’s problems.

Now that Trump is President, the comments are coming back to complicate his golf habit.

Trump’s top aides would rather obscure that fact, especially considering the President’s past comments about the sport and the White House.

“I’m going to be working for you; I’m not going to have time to go play golf,” Trump said during a 2016 event in Virginia.

For the most part, aides have declined to confirm that Trump was playing golf on weekends in Florida, instead repeatedly telling reporters that the President “may” hit a few balls at his course but that they didn’t know for sure.

On multiple occasions, though, Trump’s games have been made public. CNN has seen Trump golfing — driving up the 12th hole on his championship course at Trump International Golf Course — multiple times during the former reality star’s first two months in office.

It has also been revealed — through golf blogs and media reports — that Trump has played with top professional golfers such as Rory McIlroy, one of the top-ranked golfers in the world. While hosting Japanese Prime Minister Shinzo Abe in Palm Beach last month, Trump also played a full round with the foreign leader and professional golfer Ernie Els.

Trump’s preferred course by far is the one closest to his Florida home: Trump International Golf Club. He has visited the course all 10 times he has golfed since becoming President. Only one time — while hosting Abe — did the President also visit Trump National Golf Club in Jupiter.

Trump also visited his course in Sterling, Virginia, on March 11 for a meeting. It is unclear whether he played.

Trump made critiquing Obama for golfing a part of his 2016 message.

And before he ran for president, Trump would tweet about Obama’s golfing.

“Can you believe that, with all of the problems and difficulties facing the US, President Obama spent the day playing golf,” Trump tweeted in October 2014. “Worse than Carter.”

ST. LOUIS – The St. Louis Circuit Attorney’s Office has charged a 19-year-old in the fatal stabbing of his sister.

SPRINGFIELD, Ill. (NEXSTAR) - When he was running for office in March of 2018, primary candidate J.B. Pritzker pledged if he won the race for governor, he would veto a redistricting map “that is in any way drafted or created by legislators, political party leaders and/or their staffs or allies.”

In 2021, heading towards a potential bid for re-election, Pritzker signaled support for top Democrats in the legislature who are forging ahead to pass political maps drawn with incomplete or partial data from the American Census Survey data, instead of the full data from the U.S. Census, which is delayed due to the pandemic.

LIBERTY, Mo. (AP) — A southern Missouri man has been arraigned on first-degree murder charges in a shooting that killed one person and critically injured three others.

Oregon County authorities say the court entered a not guilty plea for 28-year-old Christopher Lindley, of Thayer, on Monday. He is accused of shooting the victims early Saturday at the Snappy Mart in Koshkonong.

COVID hospitalizations down dramatically across Missouri

Want to recycle your old tech? Best Buy will pick it up from your doorstep