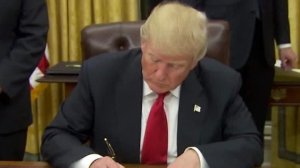 WASHINGTON — President Donald Trump signed three executive actions Saturday, imposing a five-year lobbying ban for administration officials, reorganizing the National Security Council’s structure and calling for a plan to be delivered to him within 30 days on how to defeat ISIS.

Trump signed the actions in the Oval Office surrounded by several of his aides and in front of reporters.

When signing his action calling for a five-year lobbying ban for administration officials, Trump referred to a ban imposed by his predecessor, former President Barack Obama.

Like Trump, Obama campaigned on a vision of Washington reform, promising to target the revolving door of political service and lobbying jobs. Once in office, he ordered a two-year ban on administration officials from lobbying. Trump said on Saturday Obama’s ban was insufficient.

“It’s a two-year ban now, and it’s full of loopholes,” Trump said, before quipping to his staff, “You have one last chance to get out.” Administration officials also said Saturday’s lobbying ban would include a lifetime prohibition on lobbying on behalf of foreign governments.

However, Trump’s move to ban his aides from cashing in on their current jobs may be easier said than done. Lobbying can be ambiguously titled in practice, and while former staffers may not become registered lobbyists, they could potentially trade influence and government experience for a hefty paycheck all the same.

The text of the NSC memorandum as provided by the White House established the organization of Trump’s National Security Council, providing specific roles for his national security adviser Michael Flynn and homeland security adviser Tom Bossert.

The action on ISIS outlined specific requirements of the plan Trump wants, including a “comprehensive strategy,” recommended changes to the rules of engagements and use of force as well as the “identification of new coalition partners.”

The nation’s top military advisers had been readying a plan for Trump, who met with the Joint Chiefs and Secretary of Defense James Mattis at the Pentagon Friday. Mattis and Joint Chiefs of Staff Chairman Gen. Joseph Dunford have been reviewing potential options for dealing with the terrorist group, and the action signed Saturday calls for Mattis to coordinate with Dunford, the director of national intelligence and other Cabinet officials to shape the plan.

After signing the action on ISIS, Trump said, “I think it’s going to be very successful.”

By Eli Watkins and Athena Jones

BELLEVILLE, Ill. - The City of Belleville is planning to demolish 20 dilapidated homes throughout the city.

SOULARD, Mo. - The 2021 Soulard Mardi Gras will be virtual and organizers will release more information later this month.

Soulard is inviting the public to tune in to their Facebook for a Soulard Mardi Gras Virtual Halloween. During this event, they will be announcing the plans for Mardi Gras 2021.

According to the Missouri Department of Health and Senior Services, the state has recorded 162,723 cases of SARS-CoV-2—an increase of 1,854 positive cases—and 2,657 total deaths as of Thursday, Oct. 22. That’s a case-fatality rate of 1.63 percent.

QT set to give out vanilla cones on Halloween night

Missouri drivers have cheapest gas in the Country, AAA says

Holiday shoppers can now reserve their spot in Target

Gov. Pritzker: Things are moving in a concerning direction in the Metro East

St. Louis mourns the loss of Robert ‘Mr. Next’ Dukes of The Best Steak House

Some Schnucks customers were charged twice for groceries over the weekend