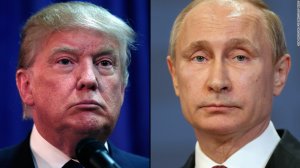 WASHINGTON — President Donald Trump appeared to equate US actions with the authoritarian regime of Russian President Vladimir Putin in an interview released Saturday, saying, “There are a lot of killers. You think our country’s so innocent?”

Trump made the remark during an interview with Fox News’ Bill O’Reilly, saying he respected his Russian counterpart.

“But he’s a killer,” O’Reilly said to Trump.

“There are a lot of killers. You think our country’s so innocent?” Trump replied.

A clip of the exchange was released Saturday and the full interview will be aired Sunday.

It was an unusual admission coming from the President of the United States. Trump himself, however, has made similar points before.

“He’s running his country and at least he’s a leader, unlike what we have in this country,” Trump told MSNBC’s “Morning Joe” in December 2015.

In the interview with O’Reilly, Trump noted that just because he respects someone, “doesn’t mean I’m going to get along with them.”

“He’s a leader of his country and I say it’s better to get along with Russia than not, and if Russia helps us in the first against ISIS, which is a major fight, and Islamic terrorism all over the world, a major fight — that’s a good thing. Will I get along with them? I have no idea,” Trump said.

Trump and Putin spoke on the phone last Saturday, where the two discussed working side by side in the fight against ISIS, among other areas of cooperation.