ST. LOUIS (KTVI) – The St. Louis City murder rate continues to climb over last year. The two most recent homicides happened inside a BMW in a park residents describe as very family friendly.  It happened around 9 am this morning. A witness who does not want to be identified saw a woman stumble from the car.  He said, "Her right arm from her wrist to her elbow was bloody there was blood all over her face."

He was driving through O'Fallon Park in north city when he spotted the BMW in the grass; it came to a stop after hitting a light pole. Two men were dead inside. Both had been shot in the head.

The witness said the young woman wanted his help  the witness said, "She started running toward my van screaming her boyfriend had been shot saying help me help me I said I am helping you I'm going to call the police. No, I don't want the police because I have a gun and some drugs on me."

He locked his van doors and she ran away.  He says police told him it appeared that all of the shots were fired inside the car.

Family and friends of one of the victims arrived and were overcome by grief. They shared their tears and their sorrow. They did not want to be interviewed on camera. But the sister of one of the dead men who was 24 said both victims had been friends.  They are the 107th and 108th homicides in the city this year. There's been about a 20% increase in the number of homicides in the city this year. 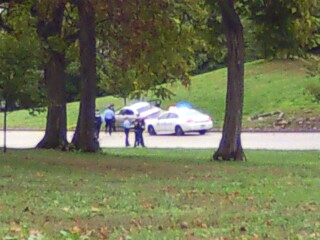