ST. LOUIS, Mo. — Two men have been taken into police custody after five people were shot and killed Saturday in north St. Louis County this weekend. St. Louis County Police say that there is still an active investigation in this case.

Police are still asking the public for tips in this investigation. Call the St. Louis County Police Department at 636-529-8210 to speak to investigators if you have any information. To remain anonymous or potentially receive a reward, please contact CrimeStoppers at 1-866-371-TIPS(8477).

Twenty-five shootings recorded, including five people found murdered Saturday inside an apartment in North St. Louis County. St. Louis County Police Chief Jon Belmar confirmed Monday that the murder victims were all men between the ages of 37 and 65. Family members said two of the victims were related. Belmar made a plea for anyone with information about the deadly shooting to come forward. 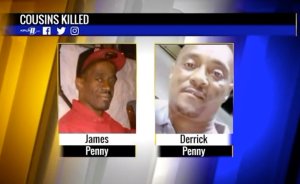 Belmar said he wants those responsible brought to justice.

“One is too many and to have something like this happen to people who live in the communities. They deserve better. It does rock a community,” he said.

The chief said somebody out there knows something.

“Ultimately, we have to have people come forward that know what happened,” Belmar said. “There are people that know to assist law enforcement no matter if we are.”

Police are still trying to figure out a motive and what lead up to the murders.

However, investigators confirmed illegal activity happened inside the vacant apartment and at least part of the building had been boarded up and was not supposed to be occupied. Not all the units are vacant. Belmar said those type of associations can sometimes lead to violent behavior.

“This was firearm related, a weapon used, narcotics-related to some extent, and a vacant home,” he said.

In addition, he said, there were 7 people transported with injuries to local hospitals and multiple people were treated at the scene.

ST. LOUIS - Street barricades put in place to combat reckless driving and gunfire in Downtown St. Louis are now on the move.

ST. LOUIS COUNTY, Mo. - Bars, restaurants, and casinos in St. Louis County are no longer required to shut down at midnight. The lifting of the curfew was announced Friday, along with other changes.

Arcade games can now be played at places such as movie theatres, arcades, and bowling alleys.  The county will still require some precautions for customers playing those games, including mask wearing.

Pandemic stress cited as a reason for Rockwood superintendent’s retirement